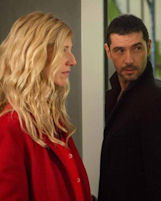 Youth may be wasted on the young, in America, but in France they do a much better job of it. The real trick is to live youth through a lifetime. For an example of doing that, for better or for worse, see the sparkling middle-aged Margaux meet her next-gen millennial Margaux doppelganger in this generation-bending take on romance.

Presented by Film Society of Lincoln Center and UniFrance as part of the 24th edition of Rendez-Vous with French Cinema screening in New York City, Sandrine Kiberlain sparkles as a very sexy woman who is beginning to fight back the wrinkles she deserves. It could be worse. Her ex, played by the ever-charming Melvil Poupaud, describes his esophagus as having eaten half his stomach.

The younger 20-something Margaux is played by an energetic Agathe Bonitzer. Her parents are well off and quite understanding when she sleeps in other bedrooms now and then. Of course, they tend to dress up as two of the three musketeers around the house. Far from the flighty rich girl her home suggests, she never seems to have any money. Insulted at being late to work again, quits her job at a clothing store and storms out in style, wearing the dress she just stole from her employer. Nothing comes of it, of course, because this is France and there is romance in the air. What’s a girl to do?

This insouciant tale from Sophie Fillières (“If You Don’t, I Will”) teeters into the good-natured supernatural, the older Margaux seeming to know unknowable details about the younger woman’s life. “Don’t go home with him, I’m warning you.” Maurice Chevalier may be at every party but Stephen King lurks around the corner. At least until the last half of the movie when it turns out the elder woman is neither psychic or living in another dimension, she is simply older and wiser.

When one thinks about it, almost everything that has happened to anyone has happened before to someone else. The sweet thing about this story is that even after the wisdom of age is ignored, with painful results, neither the young nor the old would have it any other way. Life is love and love is pain. Well, OK, not the sex part.

The first half is speckled with funny moments when the, still quite ravishing, 40-something Margaux tries to recapture her youth and fit in with the younger generation, with predictable results. Wrong move, but good for a laugh. Maybe she needs a grandmother of the next earlier generation to warn her away. By the last half of the film, we are on firm rom-com ground as the scene shifts to a silly road trip and even sillier ski slopes. Shushers wearing Gucci’s right and left, as many extras as the budget could bear. If there was ever the tendency to take anything too seriously in this flick, that is behind us now.

Simple close-up scenes and sincere cinematic statements on life in the big city make up the photography. It is critical that the camera take us into the heads of the characters, and it does, thanks to the old pros Sophie and Sandrine. 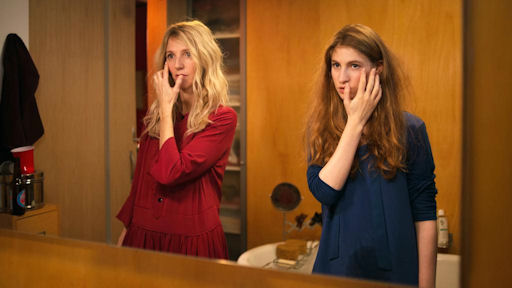