What motivated a refugee woman who wore a hajib, lived according to Muslim custom, and had three children to enter state politics in Minnesota? This documentary follows her 2016 entrance into the Democratic party and the group that supported her.

Born in Somalia, Ilhan was two years old when she lost her mother and 10 at the start of the Somali Civil War (1991–2006). Ilhan’s family ended up living in a refugee camp in Kenya for four years. They eventually gained American sponsorship and resettled in Minnesota.

With remarkable prescience, Norah Shapiro, a lawyer who became a filmmaker, chose to follow Ilhan as she began her remarkably long-shot campaign.

Despite awkward and personal challenges, Ilhan stays on message and engages everyone, whether on the university campus or the sidewalk. She tells them, “Move away from complacency. Take a chance and invest in me.” She explains she is for affordable tuition, that all lives matter, and that she is campaigning to awaken the consciousness of the people.

Ilhan’s recent statements about Israel and its handling of the Palestinians, similar to Jimmy Carter’s long-standing complaints, sent alarms through the media. The director of “Time for Ilhan,” Norah Shapiro, made this response: “As part of the TIME FOR ILHAN screening tour, and as a progressive Jewish woman, I embrace the additional opportunity the recent events surrounding Ilhan have offered the film, to do what films do best: shed light on experiences different from our own, build empathy across difference, and inspire meaningful and potentially transformative discussions about hard topics, including antisemitism and Islamophobia.”

More broadly, the stated purpose of the film is to “to engage, activate and mobilize audiences to join the fight for a more representative, reflective democracy” (K2Publicity). A screening tour, “TIME FOR ILHAN Take Action,” will begin on March 8th, 2019, International Women’s Day.

Shapiro’s documentary is intelligent, but It doesn’t have the strength to lift her up. It’s a sailboat, not a hot air balloon. It was released too early and stops to soon. Ending with Omar’s state legislature victory, it needs to further explain her achievements in office, a puzzling immigration document, and her 2018 US Congressional win. Elaboration on her comments about Israel, along with other positions would also lend greater depth to not only understanding Ilhan Omar, but the growing democratic socialism movement in the Democratic party.

Despite all this, “Time for Ilhan” is an important story of vision and perseverance. It will be available on VOD/DVD March 8 for audiences nationwide. 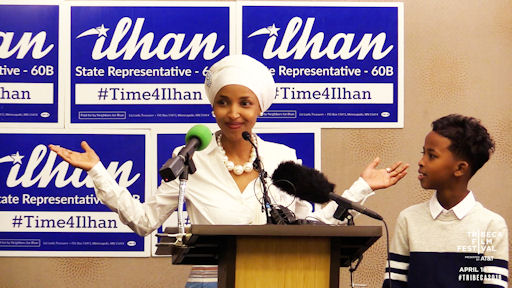