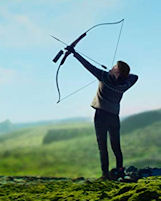 This gorgeous Icelandic film is a could-have-been. It is majestic in geography and deep in scope. A couple glitches just keep it from the Oscar list for best foreign film, but the totality of “Woman at War” is still a must-see for those who appreciate fresh perspectives.

On one level, “Woman at War” is about a woman who is fighting to keep Iceland an environmental sanctuary. On another it is a study in extremism. On yet another it examines what it means to follow our destiny, our truth, and our heart.

The film begins with Halla, energetically and strongly played by Halldóra Geirharðsdóttir, avoiding detection under moss bogs after she has knocked out power lines for a fifth time. She comes upon a farmer who remembers hearing that her people were extremists and made their own laws. For some reason, perhaps his own Icelandic independent spirit, he loans her a vehicle to safely escape and return to town where she is a pre-eminent choir director. Her living room has her heroes prominently displayed: Mahatma Gandhi and Nelson Mandela.

When is a hero a leader and when is he a terrorist?

What laws are right, just, and supportive to humanity? What is the right path when there are conflicts?

Halla is soon notified that her application to adopt a Ukrainian child has been accepted. A little four-year-old girl whose parents were killed in an uprising has been found huddled against her grandmother who had been dead for four days.

Halla, 50 years of age, is at once thrilled and begins plans to go to the Ukraine to pick the child up. However, she still has more acts of sabotage against the electrical grid to conduct. In the aftermath, she hides under bogs, in an ice cave, under the carcass of a dead ram and under the frigid water of a glacial river. Nearly dead, she runs into the farmer once again who throws her body into one of Icelandic thermal springs where she revives from hypothermia.

The story has plenty of excitement and grand photography, but the two glitches are errors in story or editing. Only through background research did I learn she was protesting an Icelandic aluminum plant. Why? I need to know more about the reasons behind her sabotage.

The second glitch is about the power system and how the farmer suddenly learns how to target a specific place. It seems improbable.

So there is unexplained information crucial to a logical progression. However, maybe logic isn’t the goal. Throughout the film, serendipitous music groups show up, seeming only there for the viewers – as if this were a play on stage where a legend or moral tale is being presented.

Majestic and sometimes inexplicable, “Woman at War” is a fabulously thought-provoking film that inspires and entertains. But how good is it? On Dec. 11, Jodie Foster announced she was coming out of retirement to direct and star in an American remake. It’s that good and, if the informational background is clear, it has the potential to bring home some Oscars.