Nothing is as it seems until the end of this Taiwanese pot-boiler, when the more things change, the more they stay the same. A young, idealistic and ambitious newspaper reporter hustles to make a name for himself. In so doing, he sticks his nose into things that might be better left alone. Recklessly disregarding his common sense, and his conscience as well, he plunges forward. And boy are we glad he did. 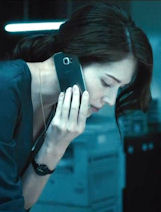 The ensuing morass of lies, double-crosses, deception and corruption roles three or four common western tropes into one non-stop binge of film noir. Director Wei-Hao Cheng takes the forbidden secret mystery thriller plot and imbues it with a subtle Asian spirituality. There is not so much danger of physical destruction, guns, billy clubs and sleeping with fishes, as there is the threat of incipient, seeping corruption. The ultimate threat of knowing the unknowable is not losing one’s health, it is losing one’s soul.

Dark, rainy nights, powerful politicians, dodgy cops and innocent victims crippled for life populate the asphalt jungle of Taiwan’s inner city. Kaiser Chuang does a bang-up job shouldering most of the screen time as reporter Wang Yi-Chi turned obsessive sleuth. Wei-Ning Hsu plays Maggie, his on-off friend and love interest, a perfect femme fatale who can buoy his spirit one minute and give him the cold shoulder the next. Not your dad’s boy-girl detective team, she sees the future and he does not, until it is too late.

The plot may be too complicated for some, trying to do too much in too little time. A few red herrings here and there make for a good noir, but if strange occurrences are too many and too clouded by the miasmatic, foggy nights, glaring headlights and garish neon, the story can be more trouble than it is worth. Flashback tools could have been stronger, falling a little flat for want of clarity, trying to be too mysterious. If the clues are going to be divulged a little at a time, give the viewers a break and make them clear and simple.

In a progressive move that western movies would do well to emulate, physical fighting, gunplay and car chases are all but non-existent. This makes us look inside, magnifying the turning of the mental wheels and foreshadowing consequences that the protagonists cannot foresee. There is no attempt to substitute noise, violence and macho one-upmanship for genuine acting. The main actors are there full time. If the older bad guys blend together, becoming symbols rather than people, this makes it hard to fix the blame on a person, making the viewer concentrate on reporter Chi who is battling demons seen and unseen.

Fun supporting cast includes Mason Lee as a young cop harboring dark secrets and Chia-Yen Ko as the mysterious ghost of violations past. As irrepressible car crash repair man Ji (Chih-Wei Cheng) says, “You can always tell, every repair leaves a trail.” As does every transgression. Although at times there are too many trails, the dark sense of foreboding keeps up until the end.