Short Film: A River in Our Own Backyard

“One of the things I like about the river is how it strips people down to who they really are.”

Set to meandering, gentle music, that statement opens this short that showcases the 2012 Paddle Oregon kayak and canoe trip down Oregon’s Willamette River. Visions of animal life above and below the river complement commentary about the work that the Willamette Riverkeeper does to protect Oregon’s most valuable resource, the Willamette River Valley.

Throughout the short, Willamette Riverkeeper Executive Director, Travis Williams, explains the challenges and pleasures of advocating for a river that travels through one of the most fertile valleys in the world. From the times of the Ice Age, rich volcanic and glacial soil settled in the valley. Now rich soil deposits can measure up to 0.5 miles deep. With such a valuable resource feeding a rich agricultural industry, the river that runs through the valley needs loving advocacy.

But it’s the footage of the paddle trip, with its lovely lush river banks and busy wildlife, that provides the exceptional photography. This week-long annual kayak opportunity includes outstanding catered meals, evening music and education presentations. Williams explains, “What we’re really promoting is the opportunity for somebody to get on the water to learn about the river and come away from it five days later with kind of a changed perception of what the Willamette is and what its focal issues are.”

The photography, showing the route of the Willamette through the most densely populated areas of Oregon, honestly records the tranquility and beauty of the river. One participant on the Paddle Oregon trip remarks, “It’s easy to be fooled into thinking you’re somewhere really remote.”

A Riverkeeper board member, James Tiefenthaler, says, “One of the cool things about seeing a committed group of citizens take hold of their river and turn it into something really cool – says that even on a big river like the Willamette people can – if they are active and volunteer and get out and clean it up – they can make a real big impact.”

This is a scenic trip down the Willamette River, whetting the viewer’s appetite to join next August’s excursion. Ultimately, it pays the Riverkeeper to sponsor these kinds of outings. As the famed Senegalese conservationist, Baba Dioum said in 1968, “In the end we will conserve only what we love. We will love only what we understand. We will understand only what we are taught.” 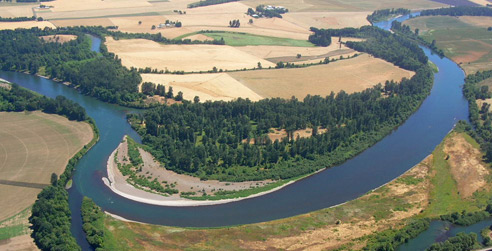