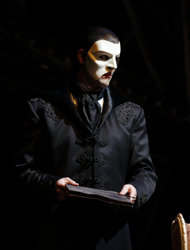 Making its first appearance in the United States, NCM Fathom and Omniverse Vision present Andrew Lloyd Webber’s “Love Never Dies,” the long-awaited continuation to “The Phantom of the Opera,” in a fully-staged production pre-recorded at The Regent Theatre in Melbourne, Australia.

This exclusive showing of “Love Never Dies” will be broadcast to select U.S. movie theaters for two nights only beginning with the premiere event on Feb. 28 at 7:30 p.m. local time; followed by an encore presentation on March 7. This exclusive event will include an in-depth interview with Andrew Lloyd Webber as well as behind-the-scenes footage following Lloyd Webber on set as he provides creative direction to the cast and crew of “Love Never Dies.

Tickets for “Love Never Dies” are available now at participating theater box offices and online at www.FathomEvents.com. For a complete list of theater locations and prices, visit the NCM Fathom website (theaters and participants are subject to change). The event will be broadcast to more than 500 select movie theaters across the country through NCM’s exclusive Digital Broadcast Network.

“I’m incredibly proud and honoured to be able to bring this production to U.S. cinemas nationwide,” said Lloyd Webber. “I hope very much that audiences take ‘Love Never Dies’ to their hearts in the same way they have ‘The Phantom of the Opera.’”

Lloyd Webber’s “Love Never Dies” is a follow-up to the award-winning “Phantom of the Opera,” featuring a 21-piece orchestra and an impressive cast of 36 including actors Ben Lewis as the Phantom and Anna O’Byrne as Christine Daaé. The cinematic production, directed by Brett Sullivan, will enchant audiences bringing them into a world of passion, obsession and romance. The captivating love story of the Phantom and Christine continues in New York’s playground, Coney Island. After his disappearance from the Paris Opera house, the Phantom begins a new life in New York amongst the freaks and side shows. The only thing missing from his new life is musical protégée Christine. In an effort to win back his love, the Phantom lures Christine and her family to this new sparkling unknown world.

“The very best of Broadway is coming to local movie theaters again in this once-in-lifetime opportunity to see the next chapter in Andrew Lloyd Webber’s Phantom saga, ‘Love Never Dies,’” said Dan Diamond, senior vice president of Fathom. “This Fathom event gives fans their first chance to see this highly-anticipated musical long before it opens in the U.S.”