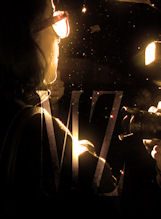 If I were to describe to you a rich socialite — famous for nothing of significance, but constantly in the headlines for abusive behavior to the paparazzi, a leaked sex-tape and outrageous public behavior — you would probably think I was talking about either Paris Hilton. Actually, I am referring to the subject of a new short film “Madeleine Zabel,” written, directed, produced and edited by Chris Shimojima.

“Madeleine Zabel” starts off looking like a segment on E! News, telling us she was a reality star turned entrepreneur turned pre-Madonna socialite who has displayed some rude and horrible conduct recently. A recent sex-tape leak is mentioned, as is an upcoming debut album.

We then transition from a television show into the hotel of Madeleine Zabel (Jenna D’ Angelo) and her publicist Janet Laverty (Kelly Waters). We come into a conversation in which they are discussing the upcoming phone interview she is about to have with a journalist Elliot Snow (Chris Henry Coffey), who just wants to get some truth out of her.

As the interview starts, things are nice and cordial. As it progresses, however, Elliot begins to ask some harder questions that Madeleine and Janet deflect as well as they can. The interview starts in a pretty typical manner, and there are prepared answers ready to go, but as it is revealed that Elliot has a bit more inside information than what had been disclosed, we get a very hardened and guarded Madeleine who softens over time to reveal more of her true self.

I won’t go into more of the specifics of the short because you can watch it right below and discover for yourself.

I am impressed with the professional look and feel of this 17-minute short film. As it started, I could have sworn that I was watching a television news program or an E! True Hollywood story. The short is simple, but shows a wide array of emotions and insecurities. It is a very strong portrayal of how media deals with public figures in a midst of controversy.

One thing I really admired about this short film was that when it begins you have two completely different people, both working their own angles. Elliot is out to uncover and possibly embarrass Madeleine even more than she has already been and Madeleine is trying to put a positive spin on her life and recent actions. But by the end of the 17 minutes, you have seen them both open up and grow closer as he begins to understand her and her actions and she drops the façade just long enough for Elliot to peer into her and see more than an unruly and rich girl.

With “Madeleine Zabel,” writer-director Chris Shimojima has crafted a subtle, yet realistic, portrait of how life can be when you’re in the spotlight and I will be watching out for any future projects he does.