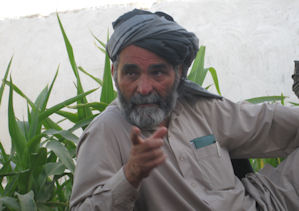 “The biggest enemies to Afghanistan are poverty, ignorance and illiteracy. It breaks my heart,” says Dr. Mohammad Kharoti, the subject of the documentary, “Stealing the Light.”

In the fall, a few students from a Vancouver, Wash., high school attended a presentation about the United States’ role in Afghanistan and then saw “Stealing the Light,” a documentary featuring one of the panel members, Dr. Kharoti, founder and president of Green Village Schools.

Convinced that their fellow classmates should be exposed to the same information, they received permission from their principal for a political forum on the war in Afghanistan. The main stipulation was that the forum offer a balance of perspectives.

Dr. Kharoti agreed and the U.S. Marines provided Capt. Lyle Gilbert, an accomplished speaker in public affairs who had served in Iraq.

On May 20, 2011, more than 500 high school students in Vancouver, Wash., viewed “Stealing the Light,” the story of Dr. Kharoti’s life and attempt to build a school in his hometown village in Afghanistan. The next day, Dr. Kharoti and Capt. Gilbert answered questions at the 2011 Skyview High School Model UN Political Forum on the current U.S. presence in Afghanistan.

The moderators, Model UN members Melani Ortiz and Caimen Rohm, both SHS seniors, read questions to the participants that had been written by students after viewing “Stealing the Light” the previous day.

The major area of agreement was the doc’s message about the potential power of education.

Kharoti and Gilbert on Supporting Education in Afghanistan

When asked if the present war in Afghanistan was the same kind of war the Russians fought, Capt. Gilbert, a five-year vet of the Iraq War, explained that the Russians were there to gain control. He pointed out that the U.S. military is there to basically bring freedom, democracy and opportunities. From his experience, he knows the Taliban, along with other factions in Afghanistan, have represented the enemy, regularly conducting operations against the U.S. mission.

Kharoti explained that tali means “student” and that the ban makes the term plural — “students.” He said that often the term is translated to mean “knowledge seekers.” Then he surprised everyone by explaining that the conservative Taliban are the ones who gave him permission to build the school for both girls and boys featured in the “Stealing the Light” documentary.

Kharoti and Gilbert on the Taliban

Before the forum, the MUN Team sent out position cards to the 520 students attending, asking them to mark the one statement that best summed up their current position on the War in Afghanistan. After watching “Stealing the Light” and attending the political forum, students were once again asked to mark their position. Here are the results:

A. I would like to see a more aggressive military presence in Afghanistan.

B. I support the current U.S. policy on military intervention in Afghanistan.

C. While I do not support a strong U.S. military presence, I do support U.S. assistance in building up the educational infrastructure in Afghanistan.

D. I do not support further U.S. presence in or financial assistance for Afghanistan.

E. I just don’t have a position at this time.

Asked what students could do to help his GVS Foundation, Kharoti told them their goal should be to “be a productive person — responsible. You are the future politics, NGOs — my request is that you stand by us to bring prosperity to those who don’t have prosperity – please help to educate the children of Afghanistan.”

After the forum, there was a whisper that Kharoti would be a good candidate for the Nobel Peace Prize. His idealism and belief in the capacity for human good is strong. His passion for education drives him in his return to his home country to continue his work for Green Village Schools. 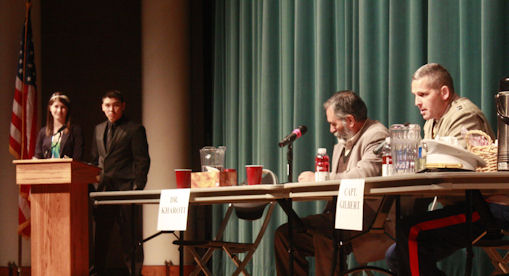