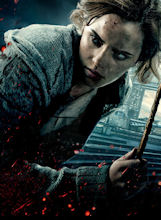 The final installment of the Harry Potter film franchise is almost upon us. And after watching Harry go through trials and tribulations over the past years, it all comes down to the final showdown with Voldemort.

Harry, Ron and Hermione (Daniel Radcliff, Rupert Grint and Emma Watson) have been searching for Lord Voldemort’s Horcruxes in order to destroy them, which will bring them to a final showdown with Lord Voldemort.

With three of the horcruxes destroyed, they must find the remaining three, in which one is said to be a fabled cup that belonged to one of the founders of Hogwarts, Helga Hufflepuff. The other two are still a mystery but they figure that Gringott’s and Hogwarts are key locations.

Lord Voldemort has gained possession of the Elder wand and his strength grows but who is the true master? Have the events of 16 years ago had a greater impact on Harry than even he knows? These questions must be answered for the Battle of Hogwarts and the fate of both the wizarding world and the muggle world will be determined.

Harry, Ron and Hermione have been searching for Lord Voldemort’s Horcruxes in order to destroy them, which ultimately bring them to an epic battle at Hogwarts.