But with the anticipation for 1997’s live action “Batman & Robin,” Warner Bros. knew the time was still ripe to have the caped crusader on the small screen.

Fortunately for fans, while “Batman & Robin” was fairing quite poorly at the box office…a legend returned to television in the form of 1997’s “The New Batman Adventures.”

Completely revamped on a visual level, this incarnation of “Batman: The Animated Series” takes place a few years after the end of the first series.

In that time span, Dick Grayson (Loren Lester) has grown out of his role as Robin…leaving Gotham to find himself and return to the playing field as Nightwing.

Meanwhile, Batman (Kevin Conroy) has brought Barbara Gordon aka Batgirl (Tara Strong) on as an official member of his crime fighting circle…along with a new Robin named Tim Drake (Matthew Valencia), a homeless street urchin who assumes the mantle after proving himself in a fight against Two-Face.

Taking even more cues from the comics, the series successfully accomplishes setting itself apart from other Batman incarnations of the time.

For example, as opposed to the original version of the Penguin (which was mirrored after Danny DeVito’s flippered portrayal in order to market alongside “Batman Returns”) the “new” Penguin is designed more along the lines of a darker Burgess Meredith…and given a legitimate front for more white collar criminal activity as the owner of swank Gotham nightclub “The Iceberg Lounge.”

Other villains were given similar treatments, including the Scarecrow…who after two iterations in the original series is presented as his darkest incarnation EVER! Poison Ivy is also altered, complete with new green-toned skin just like in the current comic books.

The color scheme of the show…including having a blood red sky to represent night…is incredibly inspired and fits very well in determining the new look for the show.

The atmosphere of the show, overall, is also far more stylized as it was modeled more in line with the stark angles and clean lines of “Superman.” In terms of tone, it’s lightened up quite a bit with the decision to include Batman’s sidekicks a bit more than before. The battles and conflicts that make up the show, while still psychological in nature, are far more “super heroic” than the original animated series.

Even so, the show is just as incredible in its own unique way with its own set of rules.

Given that the show’s run only lasted two seasons (they’re more frequently counted as the fourth and fifth seasons of “The Animated Series,” but I decided to give them there own classification), there are only a handful of episodes…but despite that, the show manages to make quite the impression on several occasions.

Perhaps easily one of the premiere episodes of the show HAS to be “Over the Edge.”

Told as an epic “what if” scenario, Batgirl is knocked off the roof of City Hall by the Scarecrow…falling to her death right in front of Commissioner Gordon! Consumed with grief, Gordon discovers Bruce’s secret identity and leads a massive SWAT team in an attack on Wayne Manor (!!!) before hiring South American mercenary Bane to finish off Batman once and for all.

Within the span of 20 minutes, fans and audiences are given one of the most emotional Batman stories possible…and that’s a real sign of craftsmanship. There are Batman films that span everywhere from 75 minutes to two hours that don’t accomplish that!

Another great episode takes on the very notion of multiple interpretations of the caped crusader with “Legends of the Dark Knight” as three inner city kids imagine their own takes on Batman. In the first, it’s a great and colorful throwback to the Batman filmmation cartoons presented in the bombastically colorful stylings of ’50s Batman artist Dick Sprang as Batman and Robin thwart the Joker’s attempted robbery of the Walker Music Center.

The second (and most “fanboy” cheer inducing) is an animated vignette of Frank Miller’s legendary 1986 mini-series “Batman: the Dark Knight Returns.” Complete with Carrie Kelly as Robin and Batman’s conflict with the Mutant Gang Leader in the city dump, the sequence features noted character actor Michael Ironside (“Total Recall,” “Terminator: Salvation”) providing the hollow, gritty vocals for Batman. Ironside is most known by fans of the collected DC animated series for his reoccurring role as Darkseid in “Superman,” “Justice League” and “Justice League Unlimited.”

What “The New Batman Adventures” lacks in the ingenuity and genius of its predecessor (like using digital scores instead of a live orchestra for instance), it more than makes up for in storytelling ambition. A lot of the avenues the series took very much set the stage for the stories the producers and writers were willing to tell in later series such as “Batman Beyond” and “Justice League.”

Among them is the episode “Chemistry,” where Bruce does the unthinkable and gives up the Batman mantle so he can get married to a new-found girlfriend!

And in “Joker’s Millions,” played as a complete farce of an escapade, the Clown Prince of Crime…penniless and living in a disgusting motel…comes into an inheritance worth millions left by a dead mob boss. Seeing the Joker go all out with a giant mansion and potential replacements for Harley is downright hysterical.

One of the standouts for the series, however, is obviously “Mad Love.”

Adapting the award-winning graphic novel created by series producers Bruce Timm and Paul Dini, the episode finally chronicles Dini’s origin for Harley Quinn…her beginnings as interning Arkham psychiatrist Harleen Quinzel and the Joker’s manipulation of her mind. Just like “Heart of Ice” before it, “Mad Love” is a wonderful insight into the twisted origin of a Batman foe…someone with good intentions who’s life turned astray as a result of tragedy and failed expectations.

Along with familiar rogues like Mr. Freeze and the Mad Hatter, the show introduced a few new additions such as crazed arsonist Firefly…and notably Calendar Girl (a variation on the Calendar Man of the comics) who has an interestingly tragic psychological angle as a former model who turned to crime after being disfigured in an accident. As it turns out she wasn’t disfigured at all…she had aged gracefully and was still beautiful to everyone; except herself. Turning to crime as a result of obsessive vanity and self-awareness…I mean c’mon, what villain is developed like that? Genius!

There’s also the high flying Roxy Rockett, a stunt performer who left Hollywood when she found it far too boring. Committing crimes and catching Batman’s attention for nothing but the thrill, there’s an underlying hint of possible sexual innuendo laced into her modus operandi. In an unforgettable final scene where Roxy and Batman are both on a collision course for a cliff…neither wanting to give in to the other in the ultimate stare down…it’s almost as if she orgasms over the entire thing! The fact that they’re having this psychological confrontation aboard a giant, phallic rocket leaves little doubt as to the erotic intent…and very little to the imagination.

All in all, it’s a very artistically-styled approach to re-introducing the animated Batman that made his first appearance back in ’92.

Putting more of the super into the hero, the series just goes to show that when you throw in the colorful villains, sidekicks and fantasy angle of it all…it’s still just as much a representation of Batman as having him fight alone against an army of gangsters and two-bit hoods.

“The New Batman Adventures” is very much a worthwhile adaptation of the dark knight. 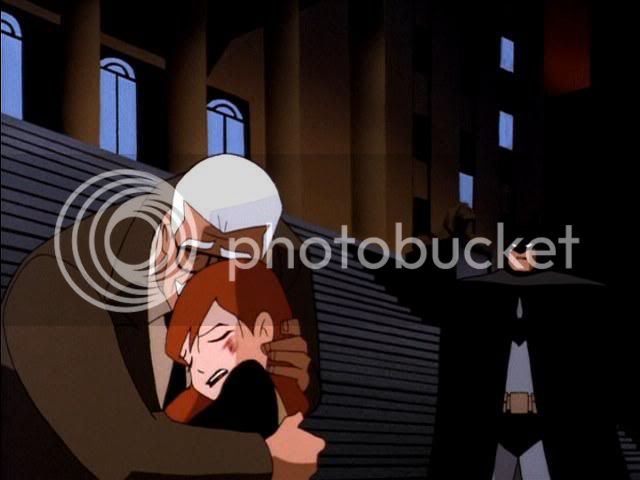 Casting and Voice Direction by …

The Dark Knight battles crime in Gotham City with occasional help from Robin and Batgirl.