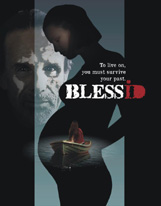 Here is a trailer you will appreciate. It is for the upcoming independent film “Blessid.” It won’t flash dozens-of-scenes-per-second from the movie, and it won’t ruin any important plot points. Instead, it is a clip for a distinctive scene from the movie.

“Blessid” is described as a psychological thriller that tip-toes on the edge of horror and after you watch the teaser trailer below, you will agree. Personally, I am loving the feel and style of the film. It’s got the color down just right — a color that gives a nightmarish sense, and a suspenseful feel, that I quite love getting drawn into.

This amazing visual is in part due to them using the startling Red Epic camera, a digital camera that features a 5K sensor capable of capturing 1 to 120 frames per second at full resolution.

Directed by Rob Fitz (who has worked on “Labor Day,” R.I.P.D.” and “Crooked Arrow”), I have a feeling we are going to be in for an enthralling ride.

Here is the official movie synopsis:

A violent, dark, funny and − ultimately − inspirational story, “Blessid” is about a pregnant woman with a cursed past who forms a bond with a man who is immortal. Why does he appear at her most desperate hour? And what can she − a person who struggles to emotionally survive each day − learn from a man who has overcome life’s greatest obstacle … time itself?”

The film does not have a release date yet, but keep it here for updates on this unique movie we are closely following with great interest.

Also, in case you are interested in a more in-depth movie description, Robert Heske —writer of “Blessid” — has written the following plot summary over at the IMDB web site.

Sarah Duncliffe is pregnant and suicidal. She is married to a man she does not love, stalked by an abusive ex boyfriend, and haunted by a dead girl who stares at her with a bloated bluish face and sad, questioning eyes. After a mishap, Sarah is instructed by her doctor to stay in bed. Begrudgingly she does. That is, until a strange older man moves in next door. A man with black teeth and an odd habit of sneaking into Sarah’s yard to steal weeds. Emboldened by curiosity, Sarah sneaks into her neighbor’s yard – only to be locked inside a greenhouse. After she breaks a glass pane to escape, she cuts herself and faints. Sarah wakes and learns the neighbor had treated her wound with a strange herbal ointment and brought her to the hospital. Eventually Sarah gets up the nerve to introduce herself to her next door neighbor. They form a fast friendship and, when Sarah sneaks a look into his picture scrapbook…