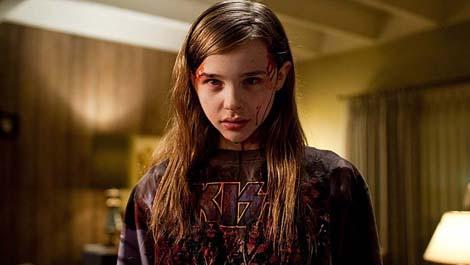 Few classic horror films have such iconic imagery as Sissy Spacek in a prom dress covered in blood in De Palma’s 1976’s “Carrie.” Well, the character of Carrie White is back in director Kimberly Peirce’s re-imagining of the infamous tale.

Carrie (Chloë Grace Moretz) is a shy girl who is outcast by her peers and sheltered by her deeply religious mother (Julianne Moore) – until she unleashes telekinetic terror on her small town after being pushed too far at her senior prom.

“Carrie” is based on the best-selling novel by Stephen King.

Yahoo! Has released the very first teaser trailer for the film and you can see it right here:

Using mostly voiceovers and showing a town in ruins and the high school ablaze, we see the massive scope of the film. Peirce has said that her film is not only a modernized telling of the story, but also follows King’s novel much closer than the previous film.

I think this is a great teaser, it introduces the character and lets anyone who is unaware of the story know the end point. It will be interesting to see the film unravel the way in which a sweet young girl could wind up in a murderous rage.

One of the most chilling and telling aspects of this trailer is the line, “There is something that no one seems to understand, she wasn’t some monster, she was just a girl.” This is very true for anyone who is familiar with the story from either the book or the film, but she was a sweet girl that was driven to do horrible things, and the fact that she had these powers made it all the worse.

While we all felt pain in watching Spacek being tortured by her school mates, it was easy to fear her when she finally snapped, especially with the religious fanaticism thrust upon her by her mother and how she did feel truly alone. I, for one, am excited to see how the incredibly talented Chloë Grace Moretz turns this into another memorable character and role for herself.

So what do you think of this short-but-sweet teaser trailer and does it get you interested in the remake more than before you saw it? Leave a comment and let us know.