Vegetarianism, Transcendental Meditation, the Dalai Lama, Mozart, Thrivent Mutual Accounts – there is always something out there that promises to bring harmony, happiness and love. In “Yogawoman,” there are all these promises and more. Annette Bening, a yoga practitioner with a lovely famous voice, narrates this cinematic tribute to women who teach and practice yoga.

As an appreciator of finding a better way, the film got me back to the yoga studio after a little sojourn in Nepal visiting Buddhist temples. After one hour of downward dog and tree pose I felt centered and energized. Magic!

Yoga was originally developed over hundreds of years ago to bring a sense of peace and enlightenment to men. As pointed out, women were originally considered obstacles to enlightenment, so they were excluded from the practice. However, along with a couple Indian women, western women have ignored the restrictions and, as the film says, “turned yoga into an international phenomenon which has become a multi-billion dollar industry.”

Through interviews with about 50 teachers, practitioners and researchers, “Yogawoman” contends that yoga can do anything from alleviating the negative symptoms of cancer treatments to grounding a woman in her hormonal cycle. There is an interview contending that it can bring a healthy mind to prison inmates and others touting experiences with peace and harmony. 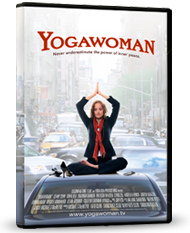 “Yogawoman” really feels more like an infomercial than a documentary. Perhaps it was simply designed to motivate more women into the yoga studio. However, I was hoping it would detail the historical, theoretical and spiritual roots of yoga and in that way deepen my own appreciation of the practice.

No matter what, credit has to go to Melanie Sandford, who rolled up 50 interviews from nine countries into a cohesive, galvanizing production.

Seane Corn, a well-respected yoga teacher, takes her gig to Uganda where her entourage ends up helping the women there build a birthing clinic. She calls her program Off the Mat into the World. While they do hold yoga classes, they also become partners in community efforts to increase the general welfare of the women who live there.

The most convincing comments in the doc come from Dr. Sara Gottfried, a Harvard-educated physician, who incorporates yoga into prescriptions for her patients. She says, “I just think that yoga gets you into a place of hormonal balance, emotional fulfillment. It prevents depression, and it prevents anxiety.”

No hard scientific data is given, but if you go to Gottfried’s website she’s got a great song list that I copied and have been playing for my high school students. It starts out with Matisyahu’s “One Day.” It’s all about this movie, Gottfried’s medical mission and yoga practice – infusing greater peace and harmony into daily practice.

Whatever the purpose or focus of this film, it will undoubtedly propel you back to your local yoga studio with added hope and resolve or influence you to sign up for the first time for a little intro course.