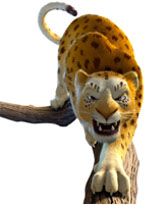 “Delhi Safari” is great-looking animated movie that seems to have slipped below the radar for me. I just watched the trailer (below) and was surprised how much I actually liked it. From Jane Lynch to Vanessa Williams, Cary Elwes and Christopher Lloyd, this movie has a top-notch cast voicing it.

The movie seems to be ultimately sending out a message to the young generation to appreciate our forests and wildlife. And if this trailer is any sign of how they are going about it, then I think it will be a new milestone. Most movies try to have a message –hidden or not — and I am fine with this.

Being a father of two, I think this trailer scores well in trying to get the children’s interest piqued to watch the movie, nothing else. The lessons learned will come later, and what affiliation those children will have to PETA or DOVE will be their decision in the future. But, as kids, all they really want to do is have fun, and the movie doesn’t seem to forget that, as what this trailer shows is a bunch of hilarious characters, and fun action.

The movie will also incorporate 3D, making it even more appealing to the kids and will mark the first Indian 3D animated film.

Here is the official movie synopsis:

“Deli Safari” is the story of a journey undertaken by a leopard cab called Yuvi (voiced by Tara Strong), his mother Began (voiced by Vanessa Williams), a monkey called Barjrangi (voiced by Carlos Alazraqui), Bagga the lovable bear (voiced by Brad Garret), and Alex the parrot (voiced by Tom Kenny), when the forest they live in is on the verge of destruction. Along the way they meet a motley crew of jungle friends from the bee (Cary Elwes), the pigeon (Christopher Lloyd), to the singing flamingos (Jane Lynch and Jason Alexander).
There mission is simple, once in Delhi they will ask the government some very simple questions –why has man become the most dangerous animal? And doesn’t man understand that if the forest and the animals don’t exist, man will cease to exist?

“Delhi Safari” was written and directed by Nikhil Advani and will trek into theaters on Dec. 7, 2012.