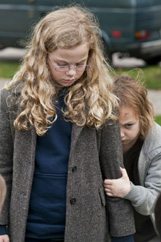 From executive producer Guillermo del Toro, creator of Academy award-winning “Pan’s Labyrinth,” comes the chilling tale of two little girls left alone in the wilderness for more than five years. Based on the novel “Mamá” by Andres Muschietti — and adapted for the screen by Neil Cross, Andres Muschietti and Barbara Muschietti — this upcoming Spanish horror film is promising to be a thriller with this brief look into the story’s plot.

After being discovered in the wilderness by hikers, Victoria and Lily are taken into custody. It is a complete mystery as to how the girls survived for so long in the wilderness but it is up to Annabel (Jessica Chastain) and Lucas (Nikolaj Coster-Waldau), who is the girls’ uncle, to now take care of the two little girls. Before long, strange things begin to happen in Annabel and Lucas’ home.

From this trailer, we can see that the two girls are the only ones who can hear, see and talk to “mama,” whom they believe is their mother. The film looks intriguing and with del Toro’s track record, one can only guess that this will be of a high caliber. However, I do see some similarities to previous horror films in the past decade, along to the likes of “Dream House” starring Daniel Craig or even “The Messengers” starring Kristen Stewart.

While I am not a huge fan of horror films, I would be willing to watch this because of the names attached.

Watch the trailer below and let us know what you think.