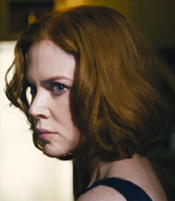 After Wentworth Miller’s four-year stint as Michael Scofield on the hit television series “Prison Break,” fans haven’t seen much of him around excluding 2010’s “Resident Evil Afterlife” and 2012’s “Loft” and “The Mourning Portrait.” “Stoker,” he’s not spending any time in front or even behind the camera, but testing his hand at screenwriting this horror, family drama and psychological thriller. The film marks Park Chan-wook’s English- language directorial debut.

Miller chose to write “Stoker” (and a prequel named “Uncle Charlie”) under the pseudonym Ted Foulke because he wanted the scripts and films to “sink or swim on their own,” without his celebrity status influencing any success at the box office. Miller’s script was voted to the 2010 “Black List” of the 10 best unproduced screenplays making the rounds in Hollywood, which means the film has a lot of promise.

Several big names — including the likes of Carey Mulligan as India Stoker, Jodie Foster as Evie Stoker and Colin Firth as Uncle Charlie — were originally attached to the production, but they dropped out and were replaced with Mia Wasikowska, Nicole Kidman and Matthew Goode respectively.

The screenplay is influenced by Brom Stoker’s “Dracula,” but is in no way about vampires. The script is also influenced by Hitchcock’s “Shadow of a Doubt,” but only as a jumping-off point and then it goes in a very different direction.

The story follows India (Mia Wasikowska) after the death of her father and best friend (Dermot Mulroney) in a tragic auto accident. Her whole world is turned upside down with her sudden loss and then the arrival of her uncle Charlie (Matthew Goode), whom she never knew existed. Charlie comes to town and to live with her and her unstable mother (Nicole Kidman). People start disappearing in town and India begins to think that her uncle is somehow involved in everything that is going on and has ulterior motives. Instead of enraging her, India becomes more infatuated with this mysterious man living in her home.

The film doesn’t have Wentworth Miller starring, but I’d like to see what he can do on paper. With a stellar cast, I foresee a genre film that will wow viewers and perhaps place Wentworth Miller among the up-and-coming screenwriters in Hollywood.