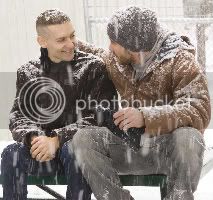 As we inch closer to Thanksgiving and Christmas, Oscar hopefuls are finally starting to hit theaters. I’m not sure the war drama “Brothers” will actually land any nominations, but it still looks like a pretty intriguing character drama.

When Sam Cahill (Tobey Maguire) goes missing in Afghanistan, his grief-stricken wife Grace (Natalie Portman) turns to his younger brother Tommy (Jake Gyllenhaal) for comfort. Tommy and Grace begin developing romantic feelings for each other as they try to put their lives back together, but everything is thrown off course again when they receive word that Sam has been found and has awoken from a coma.

Sam returns home suffering from severe post traumatic stress disorder, and his jealousy about his wife and brother’s newfound attachment pushes him over the edge.

This latest Internet trailer is essentially a shorter version of the theatrical trailer with not much new footage. “Brothers” is bound to be a heavy film, focusing on the difficult and complex emotions surrounding family loss and war-driven trauma. I’m glad to see Maguire, Portman and Gyllenhaal in dramatic roles here, and based on this footage I think they’ll work well together as an ensemble.

“Brothers” will be released Dec. 4.