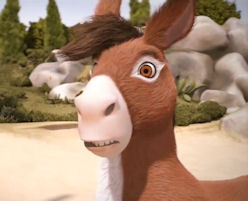 Pixar and Dreamworks may be the most recognizable names in animation these days, but they aren’t the only ones telling engaging CGI tales.

Pixable Studios is a Dresden, Germany-based animation studio that has focused primarily on creating animations, graphics and visual effects for films and video games. But now, the studio is preparing to launch its own movie project.

“Grisella” is a 15-minute short film based on the book “Grisella the Donkey” by Heinrich M. Denneborg about the bond between the titular donkey and a young boy.

“Grisella” is Pixable’s first CG short film, and the studio recently unveiled a teaser. The 35-second trailer offers a brief glimpse at the film, which looks to be as cute, sweet and emotional as Pixar’s signature shorts.

Check out the trailer below, and learn more about Pixable Studios at www.pixable.de.