Today, Warner Bros. has released what many of us have been waiting for- a first look of Henry Cavill in the famous Superman suit.

And I have mixed feelings towards about the suit — first of all, I’m so grateful that Zack Snyder decided to make the cape as it’s supposed to be, after “Superman Returns” made it way too dark. The only thing that I’m concerned about it how long the cape is, but I think it’s because of the position of his body. I’m sure once he stands straight, the cape will have an enough length.

Now, as for the suit itself, I am thinking back to our speculations from a few weeks ago that the armor-like suit Superman will have in the DC Comics reboot would be the same or similar for “Man of Steel.” It definitely doesn’t look like tights, that’s for sure, but at the same time, it doesn’t really qualify as armor-like. Since Christopher Nolan’s involved with the movie, I was sure that they would go for a realistic approach with the costume and do the same as they did with Nolan’s Batman – ditch the tights and make more of armor fighting suit. I need to see the suit in a brighter environment to get a better view of it.

The iconic “S” looks very much like the version on Christopher Reeve’s suit but at the same time, different. While it’s way too dark to see it, it appears that the underwear on the outside has been left out for the reboot, which isn’t a huge loss.

Lastly, I think Cavill looks OK in the outfit, but the hair could use a change because it doesn’t really look like a “Superman haircut.”

“Man of Steel” flies into theaters on June 14, 2013. What are your thoughts on the latest movie-version of the Superman costume? Does Cavill look a Superman to you? I want to hear your thoughts so hit it with your comments to the right. 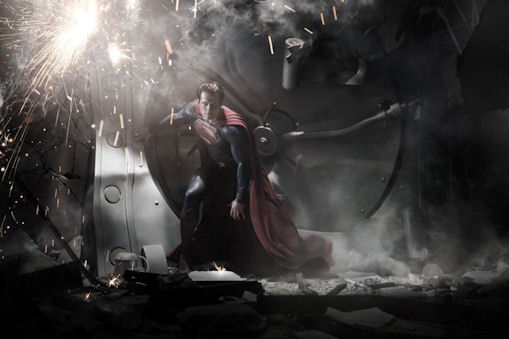 And here is the official press release:

Warner Bros. Pictures and Legendary Pictures have provided the first look at the new “Man of Steel,” revealing star Henry Cavill as Superman in the film from director Zack Snyder.

Rounding out the cast are Harry Lennix as U.S. military man General Swanwick, as well as Christopher Meloni as Colonel Hardy.

“Man of Steel” is being produced by Charles Roven, Emma Thomas, Christopher Nolan and Deborah Snyder. The screenplay was written by David S. Goyer, from a story by Goyer and Nolan, based upon Superman characters created by Jerry Siegel & Joe Shuster and published by DC Comics. Thomas Tull and Lloyd Phillips are serving as executive producers.