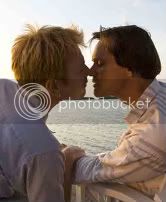 Steven Russell (Jim Carrey) is a happily married police officer. But when he is involved in a car accident that forces him to reassess his life, he comes to the realization that he is gay. Wanting to live like there’s no tomorrow, he leaves a life protecting the law for a life outside it. He becomes a skilled con man, which ultimately lands him in state prison.

During his stay at the state penitentiary he meets Phillip Morris (Ewan McGregor), a thoughtful and sensitive inmate. The two fall in love, and Steven vows to get Phillip out of prison so they can live happily ever after.

The trailer makes the film appear to be primarily a comedy, but glimpses of drama are seen that indicate Carrey will have to rely on more than his comic timing to pull off the lead role. He’s proved he can do drama with strong performances in “Eternal Sunshine of the Spotless Mind” and “The Truman Show,” so hopefully he can find a happy medium between those roles and his comic roles here.

This movie looks like it’s trying to be a lot of different things — a romantic comedy, a dark comedy, a caper flick, a bit of a drama — but however those genres mesh, it should undoubtedly be an interesting ride.