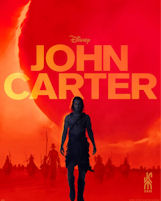 “John Carter” is based on the 11-novel series by Edgar Rice Burroughs in which former Confederate captain John Carter (played by Taylor Kitsch) is transported (through time and space?) to Mars — known to its inhabits as Barsoom. John Carter becomes involved with the conflicts amongst the planet’s various nations, whose leaders include Tars Tarkas (Willem Dafoe) and Princess Dejah Thoris (Lynn Collins). Carter learns that the planet is dying from the loss of atmosphere and water, and can only survive with the collaboration of its intelligent inhabitants.

At first glance, and knowing nothing about the novel series this film is based on, one would never know that John Carter is a Confederate soldier during the American Civil War. The opening scenes remind me of something taken from the “Star Wars” movies on the planet of Tatooine and we are about to watch a pod race or something along those lines. Plus, the “Martians” look as though they were modeled after the insect-looking inhabitants of the desert planet Geonosis from “Star Wars II: Attack of the Clones.”

There are battle scenes that would seem to look familiar to Carter since he was a soldier in our world and as a visitor on Mars, becomes a legend for the inhabitants. When watching these scenes, the one question that comes to mind for me is how is John Carter able to leap bounds while the other “humans” are not? I understand that the theory of gravity does not exist on Mars, due to the lack of atmosphere, but why haven’t the other “human” inhabitants taken this ability into account beforehand.

I am a fan of the “Star Wars” series, but there are some things in this trailer alone that make me refer to something already done and will need more than the CGI effects to make this film more appealing. With so many similarities, it will be difficult for viewers not to think back on other said series.

“John Carter” is due out in U.S. theaters on March 9. Will you be among the ones waiting in line to get your tickets for this film?