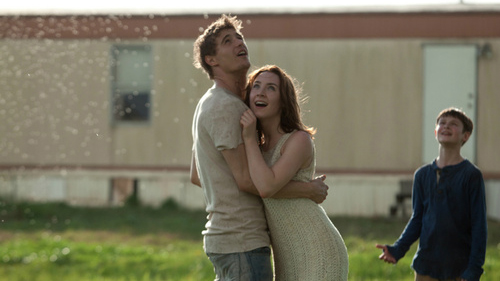 I don’t think it’s a coincidence that Stephenie Meyers second book-to-film adaptation’s first full-length trailer is being released the same week “The Twilight Saga: Breaking Dawn Part 2” — the conclusion to the Twilight movie franchise — opens in theaters and begins the final run of the movie series.

All of the publicity and interviews Meyers is currently doing for “Twilight” is free press to talk about her next novel to get the big screen treatment. “The Host” was a hit in 2008, and almost immediately after its publication there were people lining up to get the rights to it, hoping that her loyal “Twilight” fans would follow her onto her next endeavor.

“The Host” is about the human race, or the extermination of it. In the future, we are invaded by an alien race called “Souls,” a parasitic entity that inhabit your body, and erase your essence and use you like a living shell.

Melanie Stryder (Saoirse Ronan) is one of the last remaining humans and part of a rebellion to stop the extinction of the true human race. She falls in love with Jared Howe (Max Irons), a fellow fighter, and it is that love that might save her in the end. When faced with being captured and erased, Melanie tries to end her life. Upon doing so, she gives “The Seeker” (Diane Kruger) the perfect opportunity to place a “Soul” called Wanderer inside her lifeless body, but her will survives and so does Melanie, as she co-exists with the foreign being inside her body.

Seen as an anomaly, Wanderer is influenced by the bombardment of memories and emotions from Melanie’s life, and they decide to go seek out her former lover Jared and Melanie’s younger brother, Jamie (Chandler Canterbury). But when the search leads them to the desert and a group of rebellious fighters, will they accept this unusual union or will she still just be seen as the enemy?

Here is the first full-length trailer for “The Host”:

“The Host” seems to be in good hands as Andrew Niccol (“In Time,” “Gattaca”) not only wrote the screenplay — adapted from Meyers novel — but he is also directing. I think that he has the right eye and although “In Time” fell short of impressive, the suspense and visuals were quite entertaining and I can see how he will put his spin on this tale of love, family, tolerance, forgiveness and understanding.

While I do see many similarities between “The Host” and the “Twilight” franchise, I don’t think it could have quite as big of an impact as the novel doesn’t have the same following. Also worth noticing is the fact “The Hunger Games” has taken a bit of the target demographic as well and has just started the theatrical run of what is sure to be a long franchise as well.

I think that this is a smart trailer, going right into the heart of the story which is the love and connection of two people ripped apart but trying to find each other once again. The casting of Saoirse Ronan as the lead is a smart one as not only has she shown us how well she can act (“Atonement”), but also that she is great with action as well (“Hanna”). There are many more fine actors in the cast including, William Hurt, Jake Abel, Boyd Holbrook, Frances Fisher and Scott Lawrence.

So what do you think of this first look at “The Host”? Does it have the chance of turning into a phenomenon like “Twilight” did or will it be a single film targeted at teens like “I Am Number Four”? Also worth noting, as of now “The Host” is the only book written so far, but writer Stephanie Meyer has said she envisions the stories to continue into a trilogy. Leave a comment and let us know what you think and if you are willing to give this film a chance, even if you’re not a fan of the “Twilight” series?