Under Review: ‘Blood Out’ 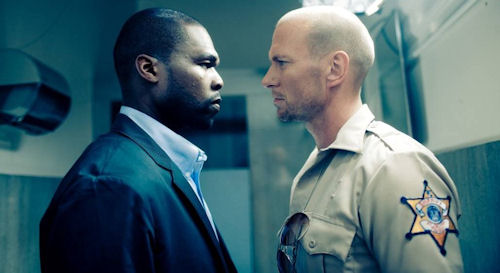 “Blood Out” is the tale of a man seeking retribution for the murder of his younger brother. Luke Goss plays the older sibling Michael Savion. When we first meet him, he is a respected small-town cop with an unshakable moral code. Unfortunately, his brother, David (Ryan Donowho), hasn’t always shared Michael’s forthright conviction. As a local gang-banger, David has been in and out of prison and, eventually, his dangerous lifestyle leads to his demise.

To find his brother’s killer, Michael Savion goes rogue. Complete with gang tats and bad-ass attitude, he infiltrates the group responsible for David’s death and becomes one of them — An Assassin. Michael is so convincing, gang leader Elias (Tamer Hassen) makes him a general.

Goss, whom some may know from “Hellboy II: The Golden Army” as elf Prince Nuada, is a definite force to be reckoned with. Although Goss isn’t formally trained in martial arts, the techniques he learned during various film shoots (primarily “Hellboy 2” with stunt coordinator Brad Allen) makes him an expert. Since Michael prefers to use his body as a weapon, someone athletic, agile and fearless needed to be cast in the role. Luke Goss was the perfect choice.

Other notable talent in this feature includes 50 Cent, Val Kilmer, Vinnie Jones and Annalynne McCord. As Detective Hardwick, I felt Curtis “50 Cent” Jackson was just okay. His performance is, thankfully, forgettable and contrary to his up-front placement on the DVD packaging, he’s only in “Blood Out” for a few scenes. Vinnie Jones, however, was effective and menacing as gunman Zed. Kilmer, as crime lord Arturo, was strange yet entertaining and Annalyne McCord, who portrayed Anya, looked good in leather.

Tamer Hassen is a new face that will be remembered. Quite villainous as Elias, he was the ultimate baddy. But I would be remiss if I didn’t mention Ed Quinn (Anthony) and Sam Medina (Squat). Although I believed Quinn was miscast, he has the appearance and charisma of an A-Lister. Check him out in the SyFy series “Eureka” as Nathan Stark if you need further validation. As for character actor Medina, he was perfectly cast as the twitchy Squat. Hopefully, his star will continue to rise.

All and all, “Blood Out” entertained me. There was never a dull moment and the action kept me enthralled. I was invested in Michael Savion’s mission and rooted for him as he took extreme measures to avenge his brother, David. Considering the restricted budget for most straight-to-video films, Jason Hewitt did well with what was at his disposal. The cinematography was great and it didn’t look cheap at all. Choosing to give the film a gritty appearance was a good call as it set the dark tone.

So, if you’re looking for a crime drama fix a la “Street Kings,” give “Blood Out” a try. It’s an engaging 90 minutes of action.