Under Review: ‘Out in the Silence’ 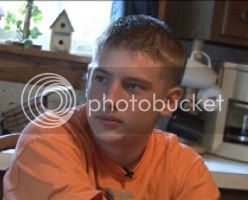 “It’s all about being ourselves,” says the filmmaker, Joe Wilson.

The Northwest Film Center series, “Voices in Action: Human Rights on Film,” has presented films this year on topics related to minority rights and how those rights affect the greater global good. Whether it is White rights in Black Africa, the loss of traditional cultures, or the US immigration policy, new perspectives on perennial problems have been presented through a challenging selection of films.

The final film in the Portland, Ore., series, “Out in the Silence,” will be screened on Nov. 4. It provides a great finale because it basically reiterates the theme all the films presented: respecting all people, whether we agree with them or not. Well, except for possibly Diane Gramley.

In every film, there is an adversary. In “Song of Tibet,” it’s the Chinese government. In “The Peasant and the Priest,” it is unregulated globalization. In “Mugabe and the White African,” it is Mugabe. In “Last Best Chance,” it is special interests working to mire up the democratic process. In “Out in the Silence,” it is the adversaries who believe in an exclusive definition of the Pledge of Allegiance (the “with liberty and justice for all” part).

This latter point of view, the one that is militantly espoused through a radio show, parade marches, and directives to church leaders is led through the voice of Diane Gramley, Head of the American Family Association of Pennsylvania. She cannot support diversity training in the public sector when it includes respecting gender orientation.

“Out in the Silence” was a documentary born from Joe Wilson and Dean Hamer’s marriage announcement in an Oil City, Pa., newspaper. They received numerous pieces of hate mail, but one piece from a mother who was asking for help.

This is the starting point of this honest, brave film. It follows this mother’s macho son, CJ Springer, as he talks about asking his school to suspend him so he wouldn’t have to endure the harassment and death threats from his classmates anymore.

CJ played all the sports at school, is a prodigy car mechanic and lets no one get away with bullying him or anyone else about being gay. His willingness to be open about his gender orientation in high school and his open defense of another gay student in the school led to ridicule and physical confrontations that were ignored by his teachers.

Along with the support of the filmmakers of this doc, these incidents led his mother to complain to the school board. Her request was small. She asked for schools to include sexual orientation in its mandated diversity training.

How did the school board respond and who magically came to the rescue? Those questions are answered. But the important point to make is that the filmmakers weren’t asking anyone to change their own views, but to allow the views of others to be represented. They were simply asking for the right to be themselves.