An Exclusive Interview with Norman Reedus

Back in 1999, when “Boondock Saints” came and went (after appearing in a handful of theaters), the odds of ever seeing a sequel to the movie were incalculably low. And, as time went by, the odds grew even longer.

The two “Saints” — played by Sean Patrick Flanery and Norman Reedus — were completely on board with reprising the roles of Conner and Murphy McManus, even if it seemed (at times) like it might never happen.

Reedus said he never gave up faith in the sequel — but still was a bit shocked when they actually got on set to make “Boondock Saints II: All Saints Day.” *

“I was super surprised. It kept almost happening,” he said. “I remember looking at Sean on the set and saying, ‘Are we really doing this?'”

“It was great. It’s kind of like working with your family,” he said. “You’re part of a group. You feel safe.”

Duffy was especially enjoyable to work with again, Reedus said.

“He’s a hothead and he’s up for everything,” Reedus noted. “He’s very passionate for what he believes in.”

Reedus also enjoys the camaraderie he shares with Flanery.

“Sean’s a crackup,” he said. “He’s so goofy and fun. It was a joy to come to set every day. After we wrapped for the day, it’s like, ‘Where are we headed tonight?'”

The hardest part of the role, Reedus said, is doing the accent.

“It’s difficult because I can barely speak English as it is. Doing the accent, it’s very specific. It’s got to be fine-tuned,” he said. “But I think my accent’s even better in the second one.”

Part of what Reedus said he enjoyed the most about the success of the first movie was that it was totally organic.

“People shared that movie with other people. It has been passed from friend to friend, from dorm to dorm,” he said. “It’s cool to be a cult dude.”

Reedus said he was happy to see the movie get a sequel — primarily for the fans.

“Sean and I have been dealing with fans for 10 years,” he said. “I know people wanted the sequel. I got asked about the sequel every day.”

And, for those fans, Reedus had a message.

“Thanks for your support. This is your movie,” he said. “As Troy said, the fans put a gun to the studio’s head and demanded a second one. I want to say a huge thank you to everyone who has supported us this entire time.”

And how does “Boondock Saints 3” sound?

“It sounds good. It sounds really good,” he said. “I could do a ton of these.”

“‘Six Ways to Sunday’ is one of my favorites that I have done. It’s a fun movie,” he said. “Some of the other cool indie movies I have done are ‘The Beatnicks’ and ‘A Crime.’ Those are three really cool films.” 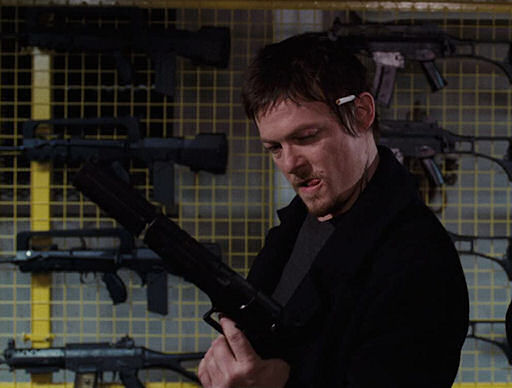 But Reedus added he also occasionally likes the challenge of bigger movies.

“I’m doing ‘The Conspirator’ in Georgia with [Robert] Redford and that’s a period piece, which is a totally new thing for me,” he said.

And working with Redford, who is directing the movie, was a plus.

The actor said he a number of factors come into play when selecting his next role.

“There’s timing, how good the script is, who’s doing it — all of the things you can think of,” he said.

Reedus said there are some other genres of movies he would like to give a try.

“I’d like to do a comedy. I think I’m funny,” he said. “And westerns are dope. I like doing all kinds of movies.”

In addition to his acting career, Reedus has worn several other hats.

“I really dig doing art shows,” he said. “I have a production company called Big Bald Head. And I have directed a few things here and there.”

Reedus also has done modeling, once beating out an A-list actor to nab a Prada campaign — something that proved beneficial for his wardrobe.

“I only had the one suit that me and my friends shared,” he recalled, “and after the campaign, I had a closet full of suits.”

However, Reedus said he doesn’t see being a full-time model in his future.

“I’m tiny, I smoke cigarettes and I drink beer,” he said. “I don’t know if I have the qualities to be a model, you know”

So … an actor, a director, an artist and a model. Anything else?

“I make a mean Eggs Benedict.”

As a bonus, It’s Just Movies writer Jason Eaken was at a press junket for “Boondock Saints II: All Saints Day” where he sat in on a round-table interview.

Here are the questions and answers:

Was there more pressure for you this time, because of the fan-base?

Norman Reedus: No, I think (fans) are going to flip out! Probably a little more pressure on Troy (Duffy), maybe C.B (Producer Chris Brinker) a little bit, and maybe even the new guys. But Sean (Patrick Flanery) and I and Billy (Connolly) and everyone else, we knew if we just do the same thing we did in the first one, it’ll be there. I mean we’ve had screenings in Phili and Boston and New York and, I mean, Boston was a standing ovation. In New York, the cops came and had to come and disperse a crowd of 1,500 people that couldn’t get in. It’s like, the line went around the block to the next block. I remember Troy saying, “Oh, this must be for the Michael Jackson movie.” And everyone was just like “Boondock!” It was like being The Beatles, it was nuts. So, I think we’re cool.

There was a guy in Phili that had, like, from his arm-pit to his hip, had us striking the gun pose and then had Il Duce all across here (indicating his entire stomach). So, we’ve see some crazy tattoos. And it’s spread in this weird way like, um, I’ve written a lot of letters to the troops. Like, there was a soldier who was blown up in this café in Cairo. And her friend ended up contacting me and they ended up identifying the girl’s body because she had Sean’s tattoo on her neck. And then the girl that called me had my tattoo on her neck, and they were like, “The Boondock Saints.” So, I wrote stuff for her funeral in Vegas. And it’s, uh, it’s spread in this really weird way that I don’t think any of us saw coming. And there’s new fans coming into it all the time that haven’t even seen the first one.

Is that overwhelming or a little surreal?

NR: It’s a little surreal, but it’s also, it’s all love. It’s like, you know, there’s nothing wrong. I’m flattered, I’m totally flattered. I’m happy for Troy because he got boned more than the rest of us on the first one. It’s flattering. I have a son who’s 10 now, but when he was 5, we were walking in Venice. We live in New York, but we were walking in Venice, here. And we walk by these skater kids, and they have a sweatshirt with Sean and I on the front. And my kid like stops and looks at it. And he’s looking at me and looking at the sweatshirt. And he walks over and punches the guy in the stomach and goes, “Why is my Dad on your shirt?”

I actually sent him to school wearing the sweatshirt. And they sent it back and saying you know, you’re holding a gun, he can’t wear it. So I painted us holding flowers on it.

How do you feel about the possibility of the third?

NR: You never say never. I could do 10 of these. You know? They’re a blast! It’s left open … Yeah, he’s mentioned it. If we do a third, it’s going to go large. LARGE, large. I’m down. Hopefully, we do it before another 10 years. Or else we’ll be on like, walkers, heading down to Miami or something.

What was it like on-set? Was it pretty laid back?

NR: Well, I mean, first off, just going from hotel to set was completely hysterical, because you’ve got Sean. I don’t know if you’ve met Sean yet. He’s completely nuts.

We saw him briefly. He was yelling.

NR: Yeah, that’s him all the time. And then you’ve got Billy Connolly. He is like the funniest guy ever. So just going to work was a blast. But yeah, I mean, Troy’s the type of director that he just knows what he wants. So, you’re comfortable working with him, because it’s like you trust your quarterback. I mean, down to like, how you say the lines … I mean, you’ll change stuff, but you’ll talk about it ahead of time. So when they yell action, there’s no … we know where we’re headed. We know how, we know what we’re going to do. But he allows you to work with him.

NR: He’ll give us all line readings. And you’ll either follow them or you won’t. And then, if you don’t like his line reading, he’s also the type of guy that you go, “It sounds retarded like that. No, I’m not doing it.” And he’ll go, “Okay.” But you know, it’s nice to work with somebody who knows what they want. Like, for example, in the courtroom scene in the first one. You know, we’re up there, you know, saying the prayer, assassinating Yakavetta and all that stuff. And instead of yelling action, he slams his hand on the table and goes, “You DELIVER these people!” And you’re just like, “F*** yeah!” You know, it’s nice work with somebody like that.

NR: They’re both super-enthusiastic, which is great. I remember Guillermo, sitting with him at the monitors, and this is a big budget film, there’s a billion people walking around. There’s martial arts, there’s creature effects, all this stuff. And I’m sitting with him, and Wesley (Snipes) is doing his ninja thing. And Guillermo is at the monitors making these noises and doing this “Pow pow…pow!” Just like he’s a little kid, and you’re just like, “Nice!” You know, it’s sort of infectious, that attitude. And Troy has that same sort of thing, it’s infectious. Guillermo is different in the way, he’s like “What are you going to do?” And I’m like “I don’t know.” He’s like, “Okay… let’s see, turn the camera on. Let’s do something.” And then Troy’s very like, “Okay, I want you to do this. You get in there and you sort those mother-f***ers out. They have killed this person, you’re going to kill this guy!” You know, so it’s a little bit different.