A Music Video from Damsels in Distress 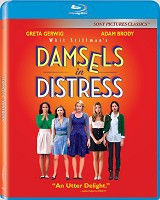 When Whit Stillman’s “Damsels in Distress” played in theaters a few months back, the flick played primarily to people who already were fans of the writer-director. But now “Damsels in Distress” is out on DVD and blu-ray and this is giving a whole new group of people the chance to check out the movie, which stars Greta Gerwig, Adam Brody, Analeigh Tipton and Aubrey Plaza.

Below, we have the music video for the track “Weekend Lover” by Victoria Aitken. The video features footage from the film and includes the song’s lyrics splashed across the screen. Truthfully, though, the song and video don’t exactly represent the movie.

I’ll be the first to say “Damsels in Distress” isn’t for everyone, but after seeing it for a second time, I’m definitely glad to have Stillman back in action. I hope he doesn’t take nearly as long next time to make a new movie.