When Mr. Freeze kidnaps Barbara Gordon for a mysterious medical procedure to save his cryogenically frozen wife Nora, Batman and Robin embark on a blazing rescue mission to save her. 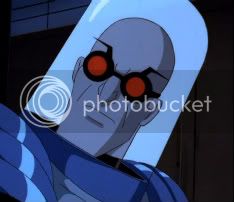 If “Mask of the Phantasm” complements the first 70 episodes of “Batman: The Animated Series,” then 1998’s “Batman & Mr. Freeze: Subzero” complements the 15 episodes that comprise “The Adventures of Batman and Robin.”

When it comes to the development of a hero or villain’s origin, a key ingredient for me is that no matter how fantastic the circumstances, there should be an heartfelt resonance or connection to the material. And in my opinion, as far as comic book character origins as they were presented and/or altered in the 1990s…no origin struck such an emotional chord with fans and audiences as the one created by Paul Dini for the now tragic Batman foe, Mr. Freeze. The origin is as follows:

After his beloved wife is struck down by terminal illness, Dr. Victor Fries (still pronounced ‘Freeze’) has her cryogenically frozen in a machine of his own design until he himself can find the cure. However Gothcorp, the Gotham City based corporation that funded Victor’s research, deems the act a misuse of equipment and decides to pull the plug, which will surely kill his wife (the process of cryogenics can’t be reversed). Driven by rage, Victor holds the CEO at gunpoint to keep him back from the machine, only to be tackled by the CEO himself into a table of cryogenic chemicals. As the CEO and the security team depart, Victor’s body is mutated…his blood turns to liquid coolant, his skin is turned a pale snowy blue…and his heart and emotions are frozen solid. Somehow surviving the accident, Victor becomes “Mr. Freeze” in order to have his vengeance on Gothcorp will continuing his research to save Nora through illegal means.

Seriously, it’s like a comic book Shakespeare, or Greek tragedy. Truly compelling material. I wanted you to read it once more prior to this review.

To be perfectly honest, with Robin, Batgirl and Mr. Freeze’s involvement…”Sub Zero” is, for me, how Joel Schumacher’s “Batman & Robin” should’ve been. What with the absence of Poison Ivy (leading to focus more on the far more interesting Freeze) and it’s darker material and plot line. Oh well…live and learn.

The film is beautiful in its art direction and overall aesthetic, with the art deco approach to the architecture and vehicles; an aspect I ALWAYS loved about “Batman: The Animated Series.”

Overall, compared to the live-action Batman films of the time, it’s Oscar worthy…but it does fall a bit short of the mark compared to “Mask of the Phantasm” or even “The Batman/Superman Movie.” It’s just not as ambitious; the storytelling is excellent but the issue is that there’s not much story to tell. It has solid peril as Batman and Robin try to solve the mystery of Batgirl’s kidnapping, but not much else. Although I have to say that the sub-plot concerning Gregory Belson and his financial troubles brought a realistic sense of flavor to the story. I mean seriously, what cartoon character do you know that has a hired stockbroker!?

One of the greatest appreciations about the film (and “Batman: The Animated Series” as a whole) IS that realism, so to speak. The fact that, despite being animated, the material is not dumbed down…quite the opposite, the creators and storytellers of the show treat it like sophisticated, feature film material. Even the camera angles and character nuances are things out of a classic noir or detective thriller.

Again, the cast is just excellent, which pretty much goes without saying when the topic of discussion is the animated projects of DC Comics.

I want to point out two of the exclusive additions to the cast for this project…George Dzunda (Scarface and the Ventriliquist from “Batman: The Animated Series” and Perry White from “Superman: The Animated Series”) is the voice of Dr. Gregory Belson and Dean Jones (Disney’s Herbie from the “Love Bug’ movies) is the voice of Belson’s Stockbroker. These two men play off of one another so well and interact and blend perfectly with the established cast.

On a side note, I loved Mike McCuistion’s score for the film. His “Nora Fries” theme with the flute and “Mr. Freeze” and “Batman” motifs are superb.

While “Batman & Mr. Freeze: Sub Zero” may not have the story resonance that “Mask of the Phantasm” has, it’s still an exciting film concerning one of Batman’s most heartbreaking adversaries.