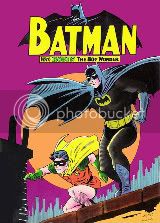 Thinking about the decade rings echoes of the past that range from over the top and commercially digestible to fundamentally altered and extraordinarily redefined.

From the space race enacted by President John F. Kennedy to the beginning turmoils of the Vietnam war…the expansion of drug use to the stylized and bombastic approach to pop art, the decade is certainly a distinct touchstone of time in history.

But as it began with aspirations of reaching a new frontier, the assassination of President Kennedy left the country disillusioned…and placed a perpetual cloud over the decade. The tragic loss marred the 1960s…and primed all aspects of government, society and art for radical change.

Counter culture emerged…authority was questioned…and Batman’s legacy was caught up right in the middle along with everything else.

As determined by “Batman” film producer and collegiate comics authority Michael Uslan, Batman comics in the ’60s could be divided into two separate classifications: 1960 to 1964 and post 1964.

The first collection fits right in alongside the ’50s books…featuring aliens and science fiction elements that continued to degenerate Batman’s sales.

One gimmicky and clichéd story came after another.

For instance, 1960’s “Batman” #131 featured an imaginary tale in which Batman is domesticated by marriage to Batwoman…while their son became Robin and Dick Grayson became Batman! WHEW!

Later, May 1962’s “Batman” #147 declared on its cover that it had “The Story of the Year”…in which Batman was reverted back into infancy. That’s right…a Bat-Baby!

As a result of the overblown storytelling, DC Comics had to make a decision.

Cancel “Detective Comics,” Batman’s long-running flagship title, or save it with the same radical redefinition that the rest of pop culture was enduring.

Turning to prominent editor Julius Schwartz, who had previously revamped old ’40s characters such as Green Lantern, Flash, Hawkman, Spectre and the Atom, DC made the latter choice…retaining confidence in the Batman character given his 20 years of successful publication.

Schwartz started with a gimmick that stuck. Combining DC characters both new and old, his inventiveness led to the formation and creation of the Justice League. The idea of putting your leading heroes together in one book (in turn to create yet another comic to sell) was a game-changer for the day…and this is what inspired Timely Comics (later to be known and beloved as Marvel) editor Martin Goodman to ask for a team book of his own. The result? “The Fantastic Four,” created by Jack Kirby…and Stanley Martin Lieber, who would go on to be known under the pen name Stan Lee.

From that point, Schwartz felt that the key to sustaining Batman’s sales was to ground him more in reality…at least more so than the ’50s had.

By 1964, the space adventures of the so-called “Interplanetary” Batman were over and done with.

In its place, Batman became Gotham City’s leading citizen. No longer a brooding vigilante or a soldier campaigning against the Axis Forces, the caped crusader was now a fully-deputized law man…an officer in a unique uniform carrying a platinum badge and answering to Commissioner Gordon.

Frequently Batman and his boy wonder sidekick would walk down the street…in full daylight AND costume…greeting the citizens of Gotham with hearty waves and dazzling smiles.

Batman’s new status in Gotham was most likely the continuous result of the Comics Code fallout of the ’50s. While it was necessary to abort the sci-fi eccentricities to better ground the stories in authentic, albeit heightened reality…there was still a mentality of moral responsibility to the readers that kept scarier and more violent aspects out of the comics.

Even so, Batman’s universe continued to broaden as the dynamic duo’s allies and enemies grew in their numbers.

1966 saw the debut of the bedazzling Poison Ivy in “Batman” #181 as she put a slight riff between Batman and Robin. The first villainous Spellbinder was also introduced that same year in “Detective Comics” #358, using his bizarre sorcery to menace Batman. A possible statement on drug use? I wouldn’t be surprised in the slightest.

But the cavalry was introduced soon enough in the form of Barbara Gordon…daughter of Commissioner Gordon (NOTE: Barbara’s ties to the Commissioner have changed frequently in the books. Sometimes she’s his niece…others she’s adopted. But core continuity counts her as his biological daughter).

Barbara made her first appearance in January 1967’s “Detective Comics” #359 as did her alter ego…Batgirl…who, despite being nothing more than an invention of Barbara’s for a Policeman’s Costume Ball, became a crimefighter in her own right after aiding Batman and Robin in thwarting a scheme from the evil but pathetic Killer Moth.

Several of these issues, under Schwartz’s editing direction, revitalized Batman with earnest.

The cartoony style courtesy of artist/co-creator Bob Kane and Dick Sprang was abandoned as Julius turned to artist Carmine Infantino to lend his draftsmanship to the books…determining at the time that it would appear more reality based in a pop art milieu. Infantino’s approach to the angles and action-sequencing was far and away different from what had come before.

Batman’s “new look” made its debut in 1964’s “Detective Comics” #327, in which his famous bat-insignia was displayed for the very first time encircled in an oval of yellow.

It was this approach to Batman that inspired producer William Dozier to bring “Batman” to the small screen with the 1966 television series…in turn the mentality and storytelling of the books were directed accordingly to cash in on the show’s success.

But fans and readers had had enough of their hero being played for the laughs.

The camp fad had outworn its welcome…and the comics had to find some way of surviving.

Fortunately, the thing about icons…is their knack for durability.

Batman was about to be granted an astounding resurrection.