Win ‘Race Across the Sky’ on DVD! 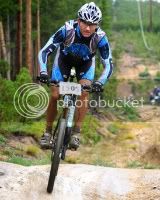 It’s time for another giveaway and courtesy of our friends at Fathom Events, we have a copy of the 2009 “Race Across the Sky” DVD to give to one lucky winner in the United States or Canada.

Here is the official synopsis: “Race Across The Sky” — the story of the 2009 Leadville Trail 100 Mountain Bike Race — will inspire you to “Dig Deep.” At 10,000+ feet, against the misty backdrop of a former mining town (Leadville, Colo.), 1,228 cyclists start the grueling 100 mile race. This epic mountain bike race was captured with 10 HD cameras throughout the course, including a helicopter and an off-road motocam. Racers include seven-time Tour de France winner Lance Armstrong, six-time defending champion Dave Wiens and three-time World 24-hour Champion Rebecca Rusch. It’s not only about getting up close and personal with the top racers, but about all the racers and their inspirational stories. You’ll laugh, you’ll cry and if you don’t get on a bike, you’ll do something amazing after watching this film!

Once you do, the phrase “RT and enter to win a 2009 “Race Across the Sky” DVD from @ItsJustMovies and @FathomEvents” will pop up on your Twitter page. Hit the Tweet button to submit it and you will be entered into the contest.

Also, be sure to follow @ItsJustMovies and @FathomEvents on Twitter to be alerted in case you win … and to learn about future giveaways. Good luck!

Tags: "Race Across the Sky"
Posted 12 Apr 2010 by SEAN GERSKI in Contests, Exclusives