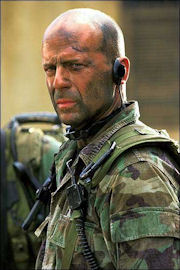 Here is a one rumor I am pleasantly surprised by — and really hope is true. According to The Hollywood Reporter, Bruce Willis is, at this very moment, in negotiations to star in “G.I. Joe: Retaliation.”

If true, this is good … this is very good. They wanted to reinvigorate the series, and they weren’t kidding. In my opinion, they are definitely going about it the right way. I watched the first movie, and although it was fun, I had a mile-long list of complaints about it. Now, they got a new director, new writers, and got rid of most of the original cast.

For the sequel, they brought in Dwayne Johnson, which I felt was a strategically great cast choice. Then, they brought in Ray Stevenson, who is no stranger to action movies. Then we got Adrianne Palicki, who I just love, and, of course, Channing Tatum is returning from the first movie.

But getting their hands on Bruce Willis would really give the film-makers that missing touch that I am sure they are looking for.

Willis does seem to be everywhere lately. I mean go ahead and Google his upcoming movies and you will see the list is endless. But, if “Joe” can nab him for even just a quick scene, this will give the movie a more respectable feel for sure. What do you think?

Jon M. Chu is directing and filming begins this month in New Orleans for a June 29, 2012, date.