As a child of the ’80s, it’s hard not to be excited at the prospect of a third installment to the “Ghostbusters” franchise.

“Ghostbusters” was my first fandom; I remember my brother and I playing Ghostbuster with proton packs we assembled out of cardboard boxes. I think it’s safe to say that many of my generation feels the same way, which is why such enthusiasm abounds for “Ghostbusters 3” all over the internet.

However, I am no longer an 8 year old playing at busting ghosts. With age comes wisdom, or at least a healthy dose of skepticism. And I am indeed very skeptical if “Ghostbusters 3” can live up to the solid first film or, more importantly, the nostalgia we’ve developed around it.

The rumors surrounding the project are what have me worried, though at first glance they seem positive. The four main cast members are said to be returning, and the rumor mill indicates that Harold Ramis or original “Ghostbusters” director Ivan Reitman will helm the film. You cannot deny that both are giants in the comedy field, but their track records as directors over the last 10 years have been less than stellar. Reitman hasn’t had a certifiable hit film since “Ghostbusters II” in 1989, and Ramis’s films have been uneven at best. “Analyze This” was good fun, but “Year One” was uninspired. Can they really make a film that is the same caliber of fun and hilarity of the original “Ghostbusters”?

The buzz around the film’s plot suggests that all the “Ghostbusters” are returning to act as mentors to a new team, which may or may not be made of some of the so called Judd Apatow Crew; so most likely Seth Rogen, Paul Rudd and Jason Segal. Rumor has it there may also be a female Ghostbuster in the mix. Dan Aykroyd bizarrely suggested Alyssa Milano for the role (Does he think it’s 1992?). My vote goes to nerdy fan favorite Kristen Bell. I’m also not opposed to some of the names being thrown around for the male leads. In fact, I may be one of the few people around who still thinks Seth Rogen is funny. But those guys are at their funniest when they are allowed to have free reign in R-rated movies. Can they tone it down enough it what will surely be a PG-13 film, and still keep us laughing? Again, my inner skeptic says no. 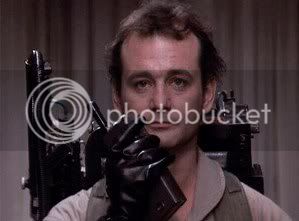 But it’s the older Ghostbusters sticking around as mentors that truly concerns me. I really don’t want to sit through a whole film of “Man, I remember how we used to do it back in the old days!” or Bill Murray and Dan Akroyd mugging for the camera. “Indiana Jones and the Kingdom of the Crystal Skull” attempted this and in the end most of the humor seemed contrived and lacked the fun that the original trilogy had. I can guess that George Lucas and Steven Speilberg felt that the novelty of seeing Indy on the screen again would be enough; it wasn’t. As a “Ghostbusters” fan, it would pain me to see “Ghostbusters III” reduced to the same thing.

For this film to be a true success, it cannot just rely solely on the nostalgia of the fans. Sure, have the older Ghostbusters in it for a bit. But when the new team is assembled, have Murray and co. step down and let the new Ghostbusters have their adventure. Getting to watch a new team stumble their way through a new battle will be fun for old fans, and it may inspire a new generation of kids to break out the homemade proton packs.

This guest column was written by H.G. Watson. To read more by Watson, check out her blog — “Does This Costume Make Me Look Fat?” — at http://captainfeminista.blogspot.com.