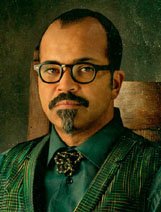 It’s time for the revealing of another Capitol Portrait character poster. Lionsgate left fans wondering who of the Catching Fire characters is “eccentric and electric” and who could possibly be the “Capitol Tastemakers.”

At first, I thought perhaps it was Josh Hutcherson as Peeta Mellark with the clue “Tastemakers,” since he is after all the son of a baker and worked as a baker as well in District 12. However, I should’ve paid closer attention to the other clue of “electric.” Of the newest characters in the trilogy, the only one that anyone would consider “electric” is Jeffrey Wright’s District 3 Victor, Beetee.

Beetee is described as an older man with dark hair, ashen skin and glasses. In his Capitol portrait, Beetee sits quietly and stoically as he looks into the camera for the portrait.

Wright isn’t quite what I pictured when I read “Catching Fire,” as I pictured a much older man, but perhaps it was just me who pictured him that way? Now, remember that the Capitol is famous for the physical alterations to their bodies. It is possible that perhaps Beetee has been forced to undergo some cosmetic surgery to maintain his youthful appearance over the years since his victory?

Lionsgate has been quite generous in giving entertainment news sites and social media platforms exclusive views of the portraits, and they have not forgotten the fans and the fan sites that made “The Hunger Games” and the book trilogy a success.

Check them out and see what they have to offer. Check back with us for the next Capitol portrait(s) as well. There are quite a few more new characters in the second installment of the trilogy.