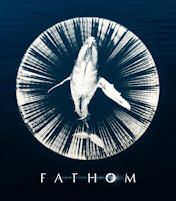 Can whales replicate sounds we introduce electronically? Could an electronic device mimic whale speech and eventually get involved in a conversation?

“Fathom” documents the communication efforts of two separate studies, one in Alaska and one in French Polynesia. Dr. Ellen Garland, in Alaska, electronically beckons whales to respond to her boat hoping to receive a mimicked response. Dr. Michelle Fournet, in French Polynesia, electronically beckons whales with whale songs she has recorded from other locations much further away.

Both researchers’ ultimate goal is to communicate with whales, perhaps learning their language and replicating whale sounds from deep underwater electronic devices.

“Fathom,” the title of this film, may represent 6 feet – but of what? Or it may represent a difficult problem to understand. Perhaps the title represents the researchers’ attempt to fathom the language of the whale. Whether they can celebrate or not is revealed towards the end of the film. But there are questions about their scientific process that, no matter what the result, are not answered.

First of all, in Garland’s quest to get whales to mimic her electronic sound, she plays the sound from a device under her boat. She explains that one of the most common sounds whales make is a “whup.” Whether they respond to her electronic device or not, isn’t it a problem that their most common sound is “whup”? How can we know if the whale is mimicking the device or coincidentally sounding off as s/he commonly does?

A further question is one of comparison. Do other animals mimic electronic sounds that mimic their own voice tone? Has this first step in animal communication been tried with other kinds of animals? Is there evidence like this with chimps or dogs? If so, what were the results?

Second, in Fournet’s quest to chart the same whale song, she is looking for whales repeating the same song over many miles of territory. Are they mimicking each other, like music, or communicating something like a poem or conversation? Or is this “song” a combination of natural sounds of whales as they travel?

Too little information is in “Fathom” to fully appreciate the research or trust the indicators of their outcomes. Though the premise for the film is definitely gripping, there is too much time, especially with the Alaska group, spent in a kind of reality tv approach unrelated to their whale project. Hopefully Fournet and Garland will follow-up in the coming years with additional video study documentaries and trust their audiences with broader as well as more detailed research information.