Film Documents Kids Who Put on ‘Empire Strikes Back’ Musical 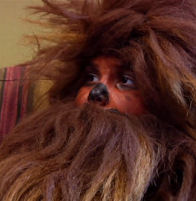 We all remember what it was like to be in middle school, that awkward age when all you want is to fit in, which is difficult when you aren’t even sure who you really are. It seems the Force was with one group of kids on their journey of pre-adolescent self discovery as they banded together to mount a musical production of “The Empire Strikes Back.”

Documentary filmmakers Heidi Burkey and Tim Larson followed the group of students from the Arts & Learning Children’s Conservatory in Anaheim, Calif., for a year in 2009 as they set out to produce their musical interpretation of the classic film. Shooting for the as-yet-untitled documentary was complete, but Burkey and Larson didn’t have the funding to complete post-production. They posted a trailer for the film on Kickstarter.com, and within a few weeks, 205 backers donated more than $10,000 for them to complete the film. Once it’s finished, it will hit the film festival circuit.

The trailer gives a sneak peek at what looks to be much more than just a bunch of cute kids in costumes putting on a funny play. It explores the time in childhood when kids are on the verge of growing up, and they just want to be liked and accepted. The “Star Wars” musical gives them a sense of solidarity and belonging as they strive to figure out who they are and where they fit in.

Check out the trailer below.