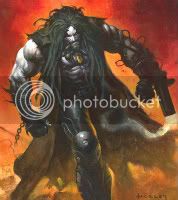 A movie version of the DC comic book character Lobo is one of those film ideas that people have constantly doubted would ever get made.

No matter how far along they got, someone would still say, “Yeah, but it will never see the light of day.”

Now, however, it is looking more and more possible that “Lobo” could actually unspool in theaters. And it looks like it could happen even sooner than expected.

Variety is reporting that Guy Ritchie has been locked up to direct the movie, which apparently would be rated PG-13.

According to Variety: “Production on ‘Lobo’ begins early next year. The character originated in 1983 in ‘Omega Men,’ written by Roger Slifer and Keith Giffen. Lobo has had several comic incarnations. In the film, he is a 7-foot tall, blue-skinned, indestructible and heavily muscled anti-hero who drives a pimped out motorcycle, and lands on Earth in search of four fugitives who are bent on wreaking havoc. Lobo teams with a small town teenaged girl to stop the creatures.”

Lobo often has clashed with Superman, and some have even speculated in the past that Lobo could be the villain in a Superman movie. Now, though, it looks like Lobo may beat the Man of Steel — at least when it comes to making progress towards a new movie.