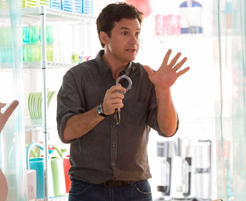 When you take two comedians such as Melissa McCarthy and Jason Bateman — each with a fine-tuned style that works for them and audiences don’t mind seeing again and again – and put them in a movie together, it would be pretty funny, would it not?

Well, unfortunately that all depends on much more than just the actors. There is the script, the director and how much free reign the actors have to improvise. “Identity Thief” is directed by Seth Gordon (“Horrible Bosses,” “Four Christmases”) and written by Craig Mazin (“The Hangover Part II,” “Superhero Movie”), so the team that is responsible for the outcome seems pretty decent, but no matter the talent behind a film, it doesn’t necessarily mean the outcome will be a successful film.

Can this comedic duo of actors bring on the laughs, or will it be slightly disappointing, like the team up of Robert Downey Jr. and Zach Galifianakis in 2010’s “Due Date”?

“Identity Thief” is centered on a regular guy, Sandy Bigelow Patterson (Jason Bateman), whose mundane existence and daily life as a corporate account man has him struggling just to pay his bills and support his wife Trish (Amanda Peet) and their two daughters.

When his jerk of a boss, Harold Cornish (Jon Favreau), cuts the company bonuses only to give himself and his head honcho associates astronomical amounts, it is the last straw for Sandy and some of his co-workers, including Daniel Casey (John Cho), who leaves the company and offers Sandy a substantially larger salary if he joins them at the new firm they are starting.

Jumping at the chance for a better life, Sandy accepts and seems to be living the good life when his credit card is declined at the gas station. Things become much worse when he is arrested for a failure to appear that resulted in a warrant for his arrest. We come to find out his identity has been stolen and the only way to clear his name is if the culprit were to walk into the local police station and confess.

When Sandy learns his new job is in peril if he can’t get the charges cleared, he decides to travel to Florida, find the woman responsible for all of this, and bring her back to Denver to clear his good name. One thing he didn’t count on was the resourcefulness of Diana (Melissa McCarthy), the woman responsible and what she is willing to do to get away with it. Trying to convince her is hard enough, but when a couple of enforcers of the local drug dealer come looking for her because of a con she pulled on their boss, she has no choice but to cooperate, or at least use Sandy for a ride.

The resulting drive back to Denver, Colo., is a bumpy road filled with car chases, bounty hunters, drunken cowboys and all other forms of torture for poor Sandy. While Diana always appears to have a backup plan, Sandy is unprepared for a journey which will push him past his limits as well as getting to the root of why Diana is a habitual con artist and feels the need to steal so much pointless stuff.

Could these two polar opposites possibly come to an understanding and even become the most unlikely of friends before this road trip is through? 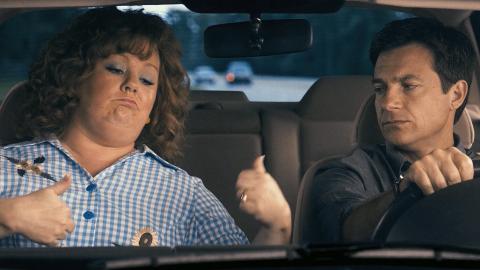 While “Identity Thief” is basically a buddy comedy mixed with opposite personalities, it’s also a road trip film with an outrageous premise. It has moments of charm and comedy that work, but overall it just feels lazy. Now, don’t get me wrong, the actors did not phone in their performances and are excellent in the roles they have been cast. Jason Bateman has a lot less to do than Melissa McCarthy with his dry, straight man delivery and dead pan quips. McCarthy goes full force in her role and, as always, gived an outstanding and outrageous reality to this very unlikable character. Melissa McCarthy is one of the funniest new comedic actors of the past few years and is a major rising star in Hollywood right now. What I meant by saying the film is lazy is that it sticks to many clichés and doesn’t seem very ambitious or original. While I did laugh, I didn’t find myself laughing a lot, it was more like a few chuckles. Most of those were due to McCarthy’s character and the things she does to get under Bateman’s skin.

“Identity Thief” felt very much like it was striving to be “Midnight Run,” but it ends up feeling more like a “Due Date” clone. Another reason I didn’t quite get into the movie is that the film’s R rating, despite many of the scenes seeming like they were made for a more family friendly environment. It has an uneven tone that relies on physical comedy with potty humor one moment and then the expletives begin to fly and then we are suddenly back in a kid-friendly movie. Besides those abrupt changes in tone that remove you from the movie-watching experience time and again, the use of repetitive gags and emasculation humor is redundant and gets old very quickly. Yes, we know that Sandy could be a girl name, you don’t have to repeat it to us half a dozen times and expect us to laugh at it.

The film did end up being a disappointment to me, but I will still say that I believe in the actors and even in their pairing together, just not with this specific film or script. While “Identity Thief” could have been witty and fun, its faults far outweigh the joy in it and for that reason I have to suggest to leave your viewing of this film for a rental instead of paying full price at the theaters.

So were you one of the many who saw “Identity Thief” and helped make it No. 1 at the box office this weekend earning over $34 million? Obviously, many people thought the pairing of these two comical actors would be a good mixture for a film. Leave a comment and let us know what you thought of the movie and if you enjoyed it.