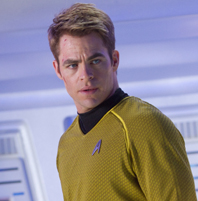 The talk around J.J. Abrams has been aflutter ever since it was revealed that Disney, with the newly-acquired rights to the “Star Wars” franchise, had hired the director to helm the new film and kick off an entirely new series of movies.

While this is exciting news to some and disappointing to others, the lens-flare-loving writer, producer and director is busy in post production and marketing for his upcoming sequel to the tremendously popular 2009 “Star Trek.”

Hitting theaters this May, “Star Trek Into Darkness” will see the return of the main characters – with many new faces joining the ranks. The mystery surrounding the identity of the film’s villain has sparked massive debates online and among fans, but if we are to believe the words directly from the mouth of the actors and J.J. Abrams himself, Benedict Cumberbatch’s character won’t secretly be Khan. Fans of the franchise are skeptical of taking anything J.J. Abrams says seriously because of his affinity for total secrecy on his projects and he could very likely be trying to stop some of the surprises from being ruined.

Below, we have an all-new featurette that shows us a look inside the film and what Abrams thinks of this movie as well as some of our main characters. While there seems to be little to no new footage included, it is interesting to hear everyone talk about how impressive the movie is turning out to be and how the sheer scope of “Star Trek Into Darkness” is light-years beyond anything we’ve seen previously.

I am excited that not only will the film be released in IMAX, but with the addition of 3D as well, just making the worlds created and explored that much more expansive. Take a look at the featurette.

Hearing all of the actors just gush over the film is to be expected because they are the ones promoting it, but knowing that this was one of the most challenging film J.J. Abrams has ever done says a lot.

Another impressive thing we learn is that Zoe Saldana, who plays Nyota Uhura, is talking about how great the 3D is, because she starred in “Avatar” which, in my opinion, is one of the best 3D films ever made.

Chris Pine, who plays Captain James T. Kirk in the franchise, is no stranger to action films; he is currently shooting “Jack Ryan,” an adaptation of the Tom Clancy novel to be released in December of this year. In the featurette, he talks about the relentless action in “Star Trek Into Darkness,” which seems to be a good sign.

While all of people in the featurette have an invested interest in the success of the film, it remains as one of the most-anticipated sequels to be released this year. The first film currently holds a 95 percent approval rating from critics on RottenTomatoes.com. “Star Trek Into Darkness” opens in theaters May 17. It also stars Zachary Quinto, Karl Urban, Anton Yelchin, John Cho, Simon Pegg, Bruce Greenwood, Noel Clarke and Alice Eve.