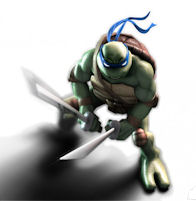 Some characters and franchises seem to always find the light of day in one form or another. So, it’s no surprise we are now getting word that the talented writing team for the upcoming “Mission Impossible: Ghost Protocol” movie have been nabbed to write, wait for it … a new script for “Teenage Mutant Ninja Turtles.”

So, it appears they will not be going with the previously-written script for the “Turtles” movie, which was written by the “Iron Man” scribes Art Marcum and Matt Holloway. Will Applebaum and Namec be rewriting that first script, or will they be working on one from scratch?

I am sure there is a fandom for this out there, and a whole new batch of kids waiting to jump on board as well, after all ninjas are hot right now. The franchise started as a comic book, went animated, then went to live action, then back to animated (in CGI), and now they are set to return in both an animated TV show (which has been in the works for a while now) and a potential movie. These ninjas can’t be stopped!

So what do you think about this? Will we see the Turtles on the big screen again? Will it be men in suits or CGI?