Nine Clips from The Raven 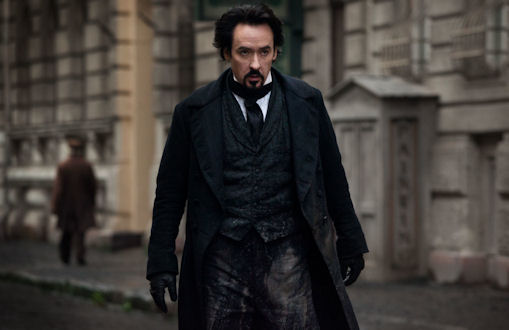 In the new gritty thriller “The Raven,” director James McTeigue (“V for Vendetta”) brings Edgar Allan Poe to life in a way never seen before. Relativity Media has released nine clips –over nine minutes of footage total — from the film and we have them for you right here at It’s Just Movies.

John Cusack is Edgar Allan Poe, the famous writer of dark poems and stories. Known for his stories full of mystery and macabre, he was also a uniquely mysterious person. Poe is surprised when he is contacted by Detective Fields (Luke Evans), who tells him that a mystery killer has started to act out some of Poe’s most grisly stories of murder and torture. Poe joins the police in an attempt to apprehend this maniacal villain as he leaves a path of bodies in his wake.

Can they solve these crimes before an innocent girl named Emily (Alice Eve) meets a horrendous fate? Poe must use his wits and all the knowledge of his writings to find a way to stop the killings from taking place and apprehend the one responsible.

The first set of four clips all have to do with the initial killings and the police force bringing in Poe as an aid into figuring them out. I’m not sure how but Detective Fields knows that these murders match the writings of Poe, but maybe he is a fan of literature. Fields doesn’t seem to think Poe is a suspect so he smartly uses him as a source of information. A second abominable discovery is made when the story of the pit and the pendulum is recreated. I find the discovery at the end of the last clip especially interesting as the victim is a writing nemesis of Poe. I do love the dark and murky look of the film and the visuals from the settings and locations seem to set the perfect mood for the film.

The next set of five clips focuses on the kidnapping of Emily and the race to save her. It is revealed in the first clip that the killer is doing all of this for the attention of Poe. It is a game and the murders are meant as a riddle for Poe himself to unravel. As more of Poe’s stories are brought to life, poor Emily’s time seems to be running out as she is trapped in a coffin. We see him writing the events that are taking place and I am not sure if it is a flashback or not. Needless to say Poe seems to have found a nemesis that is just as cunning as he is and they are sure to have some connection to each other in the end.

What did you think of those nine clips from “the Raven?” I personally like John Cusack as an actor and will be seeing this movie very soon. It seems to offer a different perspective on this famous author and I am interested in seeing how he is brought to life by Cusack in the movie.

Is this a film that you want to see? Leave a comment and let us know if you are a fan of seeing famous individuals from our past history recreated on the big screen.