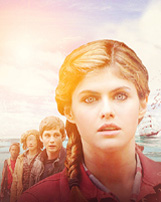 It has been three years since we were first introduced to the character Percy Jackson and his friends on their magical quest in director Chris Columbus’s “Percy Jackson & The Olympians: The Lightning Thief.” The film was a moderate success, making a total of slightly over $225 million at the box office, so it is not much of a surprise that we are getting a sequel with “Percy Jackson: Sea of Monsters.”

The second of five novels in the young adult series by Rick Riordan, “Sea of Monsters” tells the story of Percy Jackson (Logan Lerman) and his continuous fight against evil sources who wish to overthrow the God’s of Olympus and their offspring. A sacred tree is cursed in order to kill it and destroy a protective barrier that surrounds the training grounds and living area of “Camp Half-Blood.”

In order to save the tree and ensure the safety of everyone within its borders, Percy and friends Grover (Brandon T. Jackson) and Annabeth (Alexandra Daddario) are off on an adventure to traverse the Bermuda Triangle and all the monstrous entities protecting the Golden Fleece, which is the only hope of healing Thalia’s tree.

Joining the group is a cyclops named Tyson (Douglas Smith) as well as some new mentors and villains. With much more at stake than just the safety of Camp Half-Blood, time is running out for the group as a much greater evil is on the verge of being released.

The first trailer for “Percy Jackson: Sea of Monsters” is out now and you can check it out below:

My first impression is that I am happy to see that they have finally made a sequel as the first film was fun and enjoyable. But I am not sure how to feel about the replacement of Chris Columbus with director Thor Freudenthal, who is best known for “Hotel For Dogs” and “Diary of a Wimpy Kid.” Freudenthal is used to making movies for younger kids and Percy Jackson is already a family film. It doesn’t need to be oversimplified or made more kid friendly then it already is.

Another major concern I have for this sequel is the loss of some of big name actors that were present in the original — some for story reasons, others for monetary reasons — but I will say that I am happy that there will still be some great new blood present in the new film, with Stanley Tucci and Nathan Fillion being the main additions to get excited about. Jake Abel also is reprising his role and taking on a more direct villainous role as he is at the epicenter of the conflicts seen throughout the series.

From what I could see, the effects look decent and even though this second film is shooting on a smaller budget, it appears that they are heading in the right direction of bringing the book to life on the big screen. With four months left until its release, there is still more time for us to learn more about the production and I am willing to reserve judgment until after I have seen the final film.

Logan Lerman has risen up the Hollywood ladder since he was last seen as the titular character, starring in 2011’s “The Three Musketeers” and last year’s “The Perks of being a Wallflower,” which garnered some praise from critics for his performance.