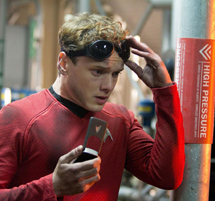 The first Star Trek program hit the airwaves in 1966 and has amassed one of the largest fan bases for any television show ever. Its impact has been felt throughout society, including science, culture and will be a part of television history forever.

Over 40 years later, the franchise is still going strong with annual fan conventions around the globe, but that’s not all as a major movie franchise is underway thanks to J.J. Abrams, who revitalized the world of Star Trek in film with his break-out hit “Star Trek” in 2009.

Now, nearly four years later, we are finally getting a sequel that fans have been clamoring for and it is looking to be bigger and better than the first. We have the final trailer for the film right here so take a look.

In this latest trailer for “Star Trek Into Darkness,” the odds seem to be against Captain James T. Kirk (Chris Pine) and his crew. With death and destruction around every corner, new villain John Harrison (Benedict Cumberbatch), a disgruntled Starfleet officer, seems to have a massive advantage over Kirk and wrecks havoc on Earth and in Space.

Going against his mentor and commanding officer, Christopher Pike (Bruce Greenwood), Kirk sets off on a revenge quest to find Harrison and bring him to justice despite protestations from his first officer, Spock (Zachary Quinto). Among lots of footage we have seen in the previous trailers, we get many glimpses of new characters and scenes, the first of which is a look at the Klingons, who have been rumored to play a large part in the plot of the film.

We also got a ton of new action in space as well as a jaw-dropping look at John Harrison’s ship — which looks like the Enterprise on steroids — and what appears to be the losing battle of the Enterprise and its crew.

While we do know that the good guys will win in the end, the question is how much damage and lives lost will be suffered in the process? With every new trailer or poster I see for “Star Trek Into Darkness,” my enthusiasm grows. While I would not consider myself a “Trekkie” at all, the 2009 film made me a fan. I loved the actors and the humor brought to these familiar characters — which made me really care for them in a way I didn’t think possible.

This new trailer has a breathless pace, which could be a hint to the film’s relentlessness of action and danger. I do like how this second film feels drastically different from the first, while also keeping all of the key components that we loved.

I really have no qualms with the trailer or what it shows and I cannot wait to see the film in IMAX 3D upon its release. “Star Trek Into Darkness” will be one of this summer’s biggest blockbuster films and possibly even a contender for sci-fi film of the year.

So, what do you think of this latest trailer? Did it change your attitude towards the film or make you want to see it even more? Leave your comments and let us know if you plan on seeing the movie in theaters this summer.