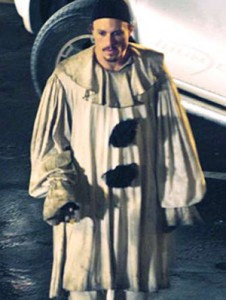 Terry Gilliam (of “Monty Python and the Holy Grail,” “Fear and Loathing in Las Vegas,” “The Brothers Grimm”) is known for directing offbeat, fantastical films, and based on this poster, “The Imaginarium of Doctor Parnassus” is no exception.

In the movie, Doctor Parnassus (Christopher Plummer) is the leader of a traveling theater troupe who guides his audience on a journey through their imaginations using a magical mirror. Parnassus made a deal with the devil (Tom Waits) involving his daughter Valentina (Lily Cole), and he sets out to save her with the help of mysterious outsider Tony (Heath Ledger, Johnny Depp, Colin Farrell and Jude Law).

I actually really like this poster. I think the overall look of it is gorgeous, and I think the swirling colors, the character portraits and the seemingly random assortment of objects set against the London backdrop really captures the whimsical feel Gilliam is going for with this film.

Though four actors now play Tony, I’m glad the focus is kept on Ledger, since the role was originally his. This sounds like a complex and intriguing film, and I’m happy that audiences will get the chance to see Ledger’s final performance.

Ledger died during the film’s production, but Gilliam was able to salvage his last role by casting Depp, Farrell and Law to complete the remaining scenes. Ledger will appear as the “real-world” Tony, while the other three actors will portray physical transformations of Tony in the mystical realms of Parnassus’ Imaginarium. Depp, Farrell and Law worked for free, giving their paychecks to Leger’s daughter, Matilda.

“The Imaginarium of Doctor Parnassus” will open in the U.K. on Oct. 16, while the film will hit U.S. screens in limited release on Christmas Day.