Review: A War (aka Krigen)

“A War” — Denmark’s official submission for Best Foreign Language Film in the 88th Academy Awards of 2016 — is a momentous movie. Not only does it show the lethal chaos and brutality of war with unflinching honesty, but it shows the war soldiers fight at home, as well.

Lead Pilou Asbæk reunites with writer/director Tobias Lindholm for the fourth time and continues with his string of military characterizations. Playing company commander Claus Pederson, Asbæk shows not only extreme courage under fire but also the understanding of his men necessary to be a leader. The film does not flinch from portraying the Danish leadership back home with being dreadfully out of touch with the lives of the soldiers they send to defend the nation.

It is also critical of the hardships endured by the families of the soldiers as they must endure the subtle trauma of separation and the nerve wracking worry that their husbands and fathers will not return. Claus’ wife Maria (well played by Tuva Novotny) and their three children are suffering at home just as their husband and father is suffering fighting a war in an extremely foreign land. As there is no end in sight for the war, there is only a horrible abyss that seems to await the family as each day crawls slowly by.

As Pederson fights to get his company of soldiers together body and soul, forces beyond his control are tearing his life apart at home and also setting the stage for what amounts to a betrayal of his loyalty by military/civilian leadership.

The movie starts out with a realistic depiction of the daily grind of war. Hours of boredom and low level tension are interspersed with random and unpredictable death and dismemberment. Commander Pederson insists on going on patrols with his men, showing infinitely more courage than the leaders at home who prefer to fight their battles from the safety of the courtroom. Although his real heroism is sharing the trauma of his men and giving them strength and protection in their time of need, this is twisted into weakness and malfeasance by bureaucrats who advance their careers on the shoulders of working men and women.

The crisis occurs in the heat of battle. Like most of the horrors of war an assault comes out of nowhere. The enemy has everything in their favor and the foreign forces are trapped in a deadly crossfire. Saving his men, Pederson is forced to make a crucial decision that results in terrible losses.

In the end, the commander, along with the audience, comes to understand that true loyalty among soldiers does not stop at the field of battle, but extends into peaceful times and places as well. As the commander has saved his men more than once, they will be called on to save him in a time of desperate need.

Filmed in Denmark and Konya Province in Turkey, almost all of the actors are actual Danish soldiers fighting in Afghanistan. 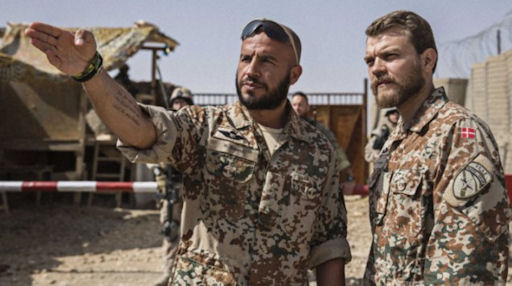