The best thing about “Bull Head” is that it focuses on the hormone abuse in the meat industry. Yeah, that is the very best thing. The worst thing is that it picks a big infected scab open on man’s inhumanity to man. It’s about bullying — bullying on different levels and in different ways.

My goal this month is to review 10 of the 63 nominees for the Best Foreign Language Film Oscar. Several are being shown this month at the Portland International Film Festival in Oregon. However, this first one on my list is still giving me nightmares, whether I’m awake or asleep. It’s the nomination from Belgium and it’s a painful film.

The story alternates back and forth between the present life of Jacky, who injects his own cattle with illegal chemicals, intimidates players in the bovine hormone “mafia,” beats up the unsuspecting and takes a frig full of steroids and hormones himself to counter his insecure masculinity.

The other part of the movie, the flashbacks to his youth where he was once a gentle, curious little boy, explains his current incarnation as an insensitive animalistic sociopath.

Just because a film is dark and depressing does not mean it’s not good. Just because I hated watching it and wished I had never seen it doesn’t mean that it isn’t a spectacular Oscar nominee. 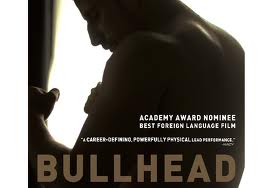 You’ll never feel the same way about that New York steak frying in the pan again. You’ll also flashback to those times in your early youth when someone said or did something to you that reshaped your perspective about yourself. People do and say cruel things.

So it’s an important, powerful, well-made film that has already won 25 awards. The acting is mesmerizing and the screenplay, sets, music and lighting all set a dark tone for irredeemable trouble. As noted in the film, some things cannot be fixed. Things happen and things are forever changed.

Showing Feb. 11 and 14 at the Portland International Film Festival