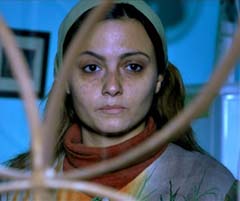 Men, if you were born a woman, what would you do? What would you do when you were disrespected? Groped in public? Disregarded? If you’re a Westerner, would your answer be different if you lived in the Subcontinent, Africa, Southeast Asia or the Middle East?

In the end, “Cairo 678” transcends culture and embraces all of us. It’s not just about gender but the universal socio-political status quo. Maybe, like war, humankind is pre-determined to manipulate, dominate and subjugate the weaker and more susceptible.

To show that insensitivity and debasement are not the province of class, Mohamed Diab, writer and director of “Cairo 678,” contrasts a very western-minded Cairo doctor, who is madly in love with his beautiful wife, with the vulgar men on the bus who daily harass women, to show the nuances and varieties of daily routine male chauvinism.

The doc and his newly pregnant wife attend a soccer game. Coming out, in the frenzy of crowd chaos, his wife is grabbed by a group of men and raped. Then her face is painted in colors. The doc gets her home, but he can’t stand to look at her. Ironically, it’s the husband who checks himself into the hospital. It’s there that his wife comes to visit him in his hospital bed. He tells her what an ordeal this has been for him because he couldn’t defend her. Her rape has brought shame to him. He explains he just needs time. She yells back that it is she who needs the comfort and attention.

At this point, she begins her women’s group. Each member is taught the use of a straight pin, something they can all easily have available, already slid through a fast accessible place in their own clothing.

One member, a rather plain woman in her 30s who dresses entirely wrapped up in a tight scarf in the fundamental Islamic way, uses this pin on a man who has been stalking and groping her on the bus she must take to work. But her encounters with groping men occur routinely. As her anger and frustration grow, so does her weapon, soon becoming more of a blade and wielded more strategically to the perpetrator’s crotch.

After each incident, she is able to quickly fade away into the Cairo rabble, but soon she has more blood on her than she can manage. She goes to the doctor’s wife, who no longer lives with her husband, and asks for help.

Is this what men would like to do if they were women? Would they respond with violence to violation? Is this the only way? Is this courageous exploration, depicted in “Cairo 678,” indicative of the worldwide Women Rising phenomenon, a rising Female Spring?

Living in the west, it was my mother’s generation who wanted to be something more than a household servant. My mother wanted to work, get paid and contribute to the family’s financial stability.

My generation catapulted the divorce rate past 50 percent in our still higher expectations for respect and equality within our new role as working women.

However, maybe “Cairo 687” has the last desperate answer to endemic sexual harassment and disrespect that doesn’t seem to be getting much better despite education and publicity.

The doc’s wife’s plan with a straight pin certainly aroused controversy over this film in Egypt. However, it is one of the 10 films chosen for sponsorship in the Global Lens Program.

This female empowerment film, inspired by real-life stories, does encourage women to stand up for themselves. But it also includes portrayals of men who join with them in inspiring support. This is an important film to see, for instruction as well as insight.