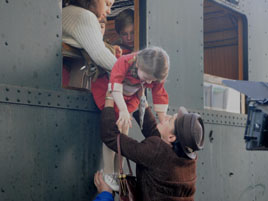 “If something isn’t blatantly impossible, there must be a way of doing it.” This credo from Nicholas Winton motivated him to become one of the great saviors of the 19th century.

In 1938, Nicky Winton, a champion fencer, sailor and skier from England, was hungry for a challenging ski vacation with a friend he was to meet in Switzerland. However, the friend phoned that he was side-tracked by a crisis in Prague. Nicky decided to join him for a beer date there instead – as long as he already had the time off from work and a train ticket.

“Nicky’s Family” is his long-silent story of what ended up happening from holiday plans gone awry. After 50 years, his wife found an old scrapbook in the attic documenting his activities that fateful year when the Nazis invaded Czechoslovakia.

The scrapbook proved to contain a ledger listing the children Nicky Winton had saved from the gas chambers. This film is narrated by one of those children, Joe Schlesinger, now a famously celebrated Canadian broadcaster, whose parents sent him to England as part of Winton’s kindertransport program that rescued about 660 Jewish children from extermination.

Of course Winton wanted to save entire families, but in all his efforts not one country was willing to relax its immigration quotas and accept more Jewish refugees. However, when he asked about saving children, one country, his native England, responded affirmatively. Germany was willing to release them and the UK was willing to accept them as long as they had host families. Winton’s job was then defined and he worked day and night to get as many families as he could.

“Nicky’s Family” documents his venture through old photos, archived film, interviews, poignant re-enactments and a reunion of the children, now in their 80’s, on a memorial train ride from Prague to meet Nicky, presesntly 104 years old, in England. 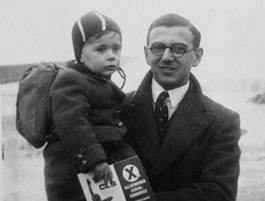 Parents who had been terrified of the escalating Nazi round-ups, had begged Winton to send their children to safety in England. No one knew for how long they would be separated. In one case a sobbing mother takes her child off the train, unable to part, but then, as the train begins to steam down the track, she providently reconsiders and passes the child back through an open window.

What happened in Prague happened throughout Europe. Jews caught without an escape route were summarily transported to the gas chambers. The last letter Schlesinger received from his father explained that they were being taken away, but that he hoped his son would not forget the precepts he had learned and would grow up to be just and decent man.

Of the original 660 saved children, at the time this film was released only 261 of them had been found. With their progeny these few now constitute about 5700. Knowing the wrenching circumstances of their family’s past sacrifice to assure the safety of their children has inspired their progeny to continue to do their best to continue to help others.

What cuts into my mind is the huge ink-black double decker auditorium sparkling with swaying cell phone lights. They aren’t waving to music but in response to a question: “If you have ever done a good deed please show it now.” The audience dialed their cell phones and held them up in silent tribute and testimony to the man, now sitting on stage, who was once side-tracked from a sports vacation. He did what he found to be possible, saving a generation of Czechoslovakian Jewish children.

“Nicky’s Family” is moving, well-told and inspirational. It is about the grand ripple effect that doing the right thing can create.

“Nicky’s Family” opens in NYC & LA
Available on Video on Demand on July 19
A national release will follow.

“Nicky’s Family” has earned over 32 awards at festivals worldwide,
including 14 audience awards from U.S. film festivals.