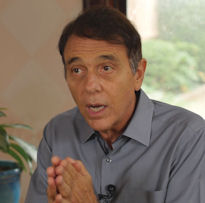 Just as the intelligent world was desperately waiting for a vaccination for COVID, those enduring cancer, genetic disorders and neurologic diseases also have been desperately wanting effective treatment to end their suffering. Nathan Crane thinks he may have an answer.

The good news is that with greater medical success, the overall cancer death rate has declined since the early 1990s. But the bad news is that cancer diagnoses, like other deadly diseases, are on the rise. It is now the first cause of death in children.

The catalyst for Crane’s research, writing, speaking and filming about ways to cure cancer was the death of his dear grandfather. His most significant theme is the mind-body-environment connection related to the increased amount of people each year contracting cancer.

Medical films touting ways to treat pernicious medical conditions range from an over-generalized hope, as in “Human Nature,” which touts CRISPR genetic engineering, to unconventional treatments, like that proselytized in “Flipping the Switch,” which calls for the absence of chemical intervention.

The problem with Crane’s production is not honesty. In the credits the deaths of significant adherents to treatments espoused in the film are posted. The problem is basic research reliability. First of all, Crane does not have a medical degree. Second, many alternatives touted in his film, like a regime recommended at a clinic in Tijuana, have dubious reviews. Also, as mentioned, are the deaths from cancer of notables who recommended practices in the film. In addition, where is the research from cancer research giants like WD Anderson, Sloan Kettering, and the University of Washington?

Nathan Crane’s research began in 2006 when he was 18 years old. He had been through ten years of addiction, incarceration, and homelessness. Now, he is a best-selling author, filmmaker, speaker, and the founder of The Panacea Community. His rise is great, but what are his medical-research credentials, who are his backers and why is there a semi-colon in his film title?

There is simply a disconnect here for me, not on disease causes, but on treatment for them. Two or three people with anecdotal stories in the film do not make a reliable quantitative study. I am not saying Crane is wrong about anything, but I am pointing out that proof for the film’s statements and advice is weak. In addition, as an English teacher, I wonder if that misplaced semi-colon isn’t a little warning.

Cinema Libre released “Cancer; The Integrative Perspective” on DVD and Video on Demand (Vimeo) on June 22, 2021.