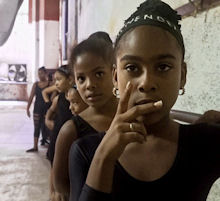 Decaying, dilapidated, dark Havana are the first shots we get from Hubert Sauper, documentary filmmaker extraordinaire. But as the film moves on, with uninhibited scenes of sensuality and crashing surf, he ends up in a children’s ballet class. A little girl heading up a line of students asks him if he can come to her house for dinner that night. He responds no because he is taking her out to a restaurant.

This doesn’t happen in documentaries! The documentary filmmaker is invisible to the audience, staying removed and objective to document, not fabricate, the subject at hand.

But Hubert Sauper, one of the most famous and most respected documentarians in the world, has been identified as creating a new form of cinema coined “cinema du lien” – the cinema of contact. He has crossed the line between observant, objective, uninvolved photographer and become an affected human being, creating resultant masterpieces of insight. He admits, even celebrates, contriving certain scenes in “Epicentro,” as well as interjecting a good friend, Oona Chaplin (Charlie Chaplin’s grand-daughter), into the mix.

Sauper has explained that “Epicentro” is about the center, as in Cuba being the center point of North and South America as well as being at the crossroads of capitalism and communism. As I researched this film and its filmmaker, I found I had opened a door to ever-expanding new universes of thought and perspective, beginning with Cuba’s representation as a utopia – or not.

How does Sauper do it? In what cagey ways does he create interest, fascination, investment, and greater insight than a standard doc?

He does take the little ballet dancer and a friend to a local luxury hotel for dinner and a swim in its luxurious pool. But first they must get past the hotel “guard” who assumes he is a guest (he is not) but that the children are not and don’t belong there. White privilege. So, it’s quite fitting when the little girl reports that she has peed in the pool.

We don’t know the charismatic little girl’s name in the film, but research reveals it is Leonelis Arango Salas. She is one of the little “prophets” that Sauper uses to tell the story of Cuba. This is a strategy he has used before. He finds children where he is filming to explain the history and circumstance of their location. He finds the greatest honesty and candor from what he calls his prophets. What Leonelis, who seems to be about ten years old, and her friends have to say is their unguarded, experiential truth.

Leonelis tells the camera that she wants to be an actress and be in Paris. This is not an untypical dream for a little girl taking ballet. But since her picture was chosen to be on this film’s poster, now she is indeed all over Paris as well as France and the world.

In the film’s beginning, a little girl, maybe 3 or 4 years old, is happily playing by herself. A group of boys, maybe 8 to 10 years old, runs past her and down the street. She gets up to join the running until she loses them. She stops, plops down on a curb and, with head in hands, cries out in despair. That’s one metaphor for Cuba. Sauper keeps them coming, with revelations and always a little surprise.

Sauper has won more than 50 awards over the course of his career. “Epicenter” will be another big winner. Already awarded the 2020 Sundance Grand Jury Prize for World Cinema Documentary, “Epicentro” premiered in virtual cinemas Aug. 28.