A cute little mouse, Celestine, wants to be an artist, not a dentist like expected. Mice, you know, are partial to their crucial incisors and value the health of their teeth. Therefore their society is built around the dental arts, including procuring spare incisors from other species. In a further break with protocol, Celestine is attracted to bears, the big enemy of the mice, but from whom incisors are a much valued commodity. We all know Celestine’s infatuation is impractical, unrealistic, and downright risky! 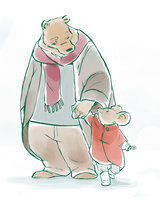 “Ernest and Celestine” is the winner of France’s Award for Best Animated film and is competing for the 2014 Oscar for best animation. Sweetly illustrated, each scene is tender and delicate in its bedtime story appeal – for all ages. Pastel colors, softly sketched figures, a sweet little mouse voice and a gentle bear make this perfect for little ones. But of course, to be truly great, a film must appeal to all people – all genders, nationalities, political orientations, and so on. “E&C” does this with deft simplicity.

At center is a lesson about thinking for yourself, giving someone a chance and not letting stereotypes and expectations dictate your life. Claim your values and your own sense of truth – it’s never too late!

Possibly the best shows screened at this year’s Portland International Film Festival are Miyazaki’s “Wind Rises” and “Ernest and Celestine,” both animations. Not a fan of that intrepid art form, drawn more to documentaries and films of social import, I am yet swept away by these two films. While “Wind Rises” is geared more for adults, this little story of a mouse and a bear is precious for all ages, young and old.

Please note, there are two versions of “E&C.” I saw the French one with subtitles. A more recent one, coming out to widespread audiences Feb. 28, is dubbed in with the famous voices of Lauren Bacall as narrator and orphanage matron, Forest Whittaker as Ernest, Mackenzie Christine Foy as Celestine and William H. Macy as the head dentist. 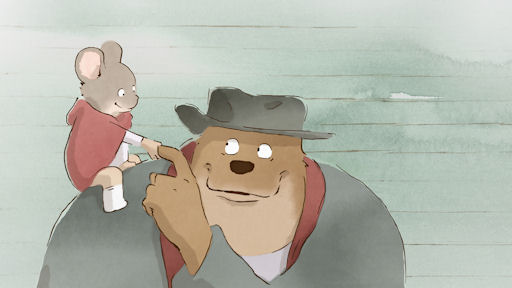