Review: Village at the End of the World 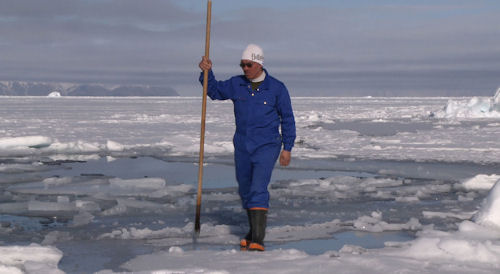 Though the sun shines, biting wind brushes through the air, icebergs loom like monoliths from the bay, and temperatures don’t get too far beyond freezing. This is Sequinnerpoq, the summer season when the sun shines. The little Inuit fishing village, Niaqornat, nestled on a bay on the frigid, bare coast of northwest Greenland, is in danger of extinction.

This cinematic documentary presents current Inuit life on this remote outpost according to the four seasons. However, this village of 59 inhabitants is in crisis because the Royal Greenland Company has closed its fish factory, the ice for winter hunting has become precariously thin and women are scarce.

There is a little humor in this superbly edited seasonal cinematic tableau. The only Inuit with a stable job is the honey bucket sanitation man, Ilanngauq Egede. Perpetually busy and in great physical shape, he bustles about the village emptying waste buckets into a master container he empties into the sea a ways from habitation. With continually stunned exasperation at the rate of villager defecation, he treks up hills carefully balancing his wheelbarrow, noting with a wry smile that if it tipped the village would be covered in excrement.

When emissaries from the government, the Royal Greenland Company, and tourist ships come, Egede, not the mayor or schoolteacher, is the only one who can speak for the village because he knows English. He happens to live in Niaqornat because, drawn through an internet connection, he married a woman who lives there.

Village life is followed by British filmmakers Sarah Gavron and David Katznelson who bring their two little children along for the experience. Their first focus is Lars, the only teenager in town. 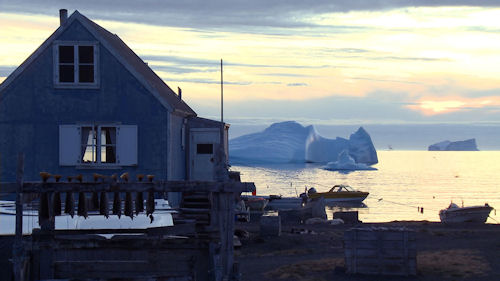 His mother was 19 when she became pregnant and she fingers the head huntsman as the father, but he will never admit it. A decision is made at the time of Lars’ birth. The mother’s parents will take the baby and raise him as their own. But by the time he is 17, Lars needs a girlfriend and wants to leave.

The schoolteacher, in the one-room School of Hope, asks his students, “What do you want to be when you grow up?” They give answers like shop clerk, pilot and fisherman. But after a lecture on global warming, when he asks them, “What is our future?” there is befuddled silence.

Gavron, in an interview, explains that the government had warned the Inuits that if their population drops below 50, sustaining the community with May-Dec shiploads of supplies would no longer be feasible and the villagers would have to be relocated.

The crisis galvanizes the elders who spend the year trying to negotiate a way to buy the defunct fish factory from Royal Greenland. Egede also organizes a connection with tourist ships seeking to visit interesting places. They tidy their village, put on their traditional clothes, spread out home-made items for sale and organize town tours. 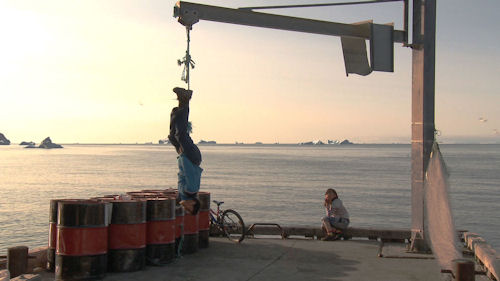 “Village at the End of the World” is being featured at
The 37th Annual Portland Film Festival
on February 19 and 20, 2014.